Final report: we’re sad to say goodbye to our comfortable and equipment-laden supermini 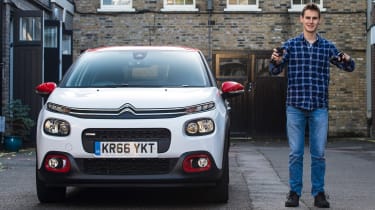 The last six months haven’t been trouble-free for the C3, but the overwhelming feeling is positive. We’ve found the car to be a great companion in town and on the motorway – and the unique styling and kit on board make it an appealing choice of supermini.

For such a small car, the Citroen C3 comes with a long list of in-car tech. The Flair model we’ve been running on our fleet has Android Auto and Apple CarPlay smartphone connectivity, sat-nav (a £500 option), DAB radio and something the C3’s rivals don’t match – a dash cam.

I’ve spent the past few months testing various bits of tech on board the C3, from how easily my phone integrates with the car to how good the sat-nav is at avoiding traffic jams. However, I have only recently managed to dig further into the ConnectedCAM features.

Whether you love them or hate them, dash cams are growing in popularity and here to stay. Not only will they help clear many disputes after accidents, insurers are now throwing discounts as big as 30 per cent on policies for drivers with one installed. Some police now accept dash cam footage as evidence of dangerous driving, too. 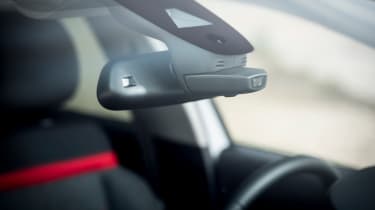 I think it’s great that Citroen has taken the proactive step of offering a dash cam in the C3, for two reasons. Firstly, it is far more discreet when tucked inside the front mirror and radar compartment than when dangling from the windscreen. And secondly, the 12V socket is freed up for other devices to be plugged in. The other dash cams you see me holding all have to be wired in and attached to the windscreen using suction cups or special tape. Would I rather it were standard on a car like this C3 Flair, or purchase an aftermarket camera and spend 30 minutes fiddling with wires? There’s an easy answer to that question...

To find out how good the C3’s camera is, we compared the footage against some of the dash cams we had in for a recent product test. Citroen’s system works quite neatly: if the car is involved in an accident, the device stores the last 30 seconds of footage automatically. Alternatively, you can press a button on the camera to take pictures or record 20-second videos. You connect to the camera using Citroen’s mobile phone ConnectedCAM app to review and even share footage on social media. Compared with the best aftermarket cams, there were areas we thought Citroen could improve on – the C3’s camera records in 120-degree vision and 1080p HD quality at 30 frames per second, for example, while some of the current aftermarket cams come with 140-degree lenses and 1440p recording. 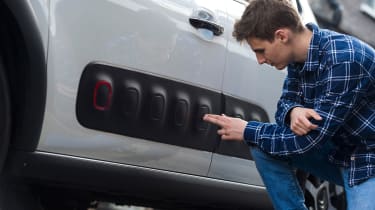 On the subject of prangs, the Airbumps on our car have proven invaluable over the past few months. The plastic body protection is another aspect of the Citroen that tends to divide opinion, but it has given me plenty of peace of mind when parking in car parks around south-west London.

This area was the C3’s home for most of my time with the car, and I’ve found it an enjoyable companion. The three-cylinder petrol has proven nippy and agile, while the soft ride has taken the sting out of the capital’s numerous potholes and speed bumps. The C3’s also proven itself to be a worthy motorway companion for some of my longer trips further afield and out of the big city.

The quirky interior styling was a highlight, and earned a lot of well deserved praise from my family and friends. So it’s with a heavy heart we bid it a final farewell. 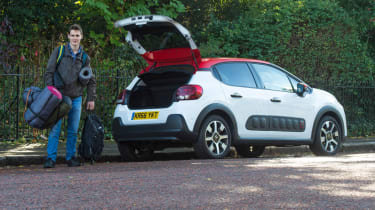 Citroen C3 supermini’s space has impressed, so we push it to limit with a camping trip

Four 40-litre rucksacks, two tents, four sleeping bags, three chairs, four folding mattresses, two pillows, food for six, 18 wooden logs, two cameras, two bags of clothes and several litres of water. This, plus me, my better half and two friends, was all supposed to fit inside our Citroen C3 for a trip to North Wales recently.

In the previous report, I mentioned that the C3 really impressed me with its interior space. And most people on the team who’ve since grabbed the keys feel the same way – there’s far more room inside than you’d expect of a supermini, which prompts the question, just how far could we push this stylish car’s practicality?

Well, what better way to test the load-lugging capabilities of the Citroen on our fleet than a weekend camping trip? The destination was the mountain of Cadair Idris, some 240 miles from my flat in south-west London.

Given I’ve so far spent my time driving the C3 in town, over the two days I not only wanted to find out how practical it is, but how it handles long jaunts on the motorway and the fun, twisty roads of North Wales.

We met our friends at 6am on a frosty Saturday. As we pulled up outside their flat, the realisation that we may have overestimated the C3’s 300-litre boot suddenly hit us. After some Tetris-like organising we fitted it all in, although with the tents overflowing from the boot, the two passengers sitting in the back made their displeasure with my plan known early on.

It was great to get some feedback on how comfy the rear seats are. Both of my friends are more than five foot six tall and apart from having tents on their laps, had no issue with leg or head space. We drove for three hours on the motorway before stopping at the M54 services in Shropshire to stretch.

After Shrewsbury we turned on to the A458, which has some great twists and turns, and meets with the even better A470, that eventually led us to the base of the hills.

It’s here where the C3 began to show a different side. Citroen has emphasised that the model is aimed towards comfort with soft suspension and a smooth ride. This is fine on London’s speed bumps and potholes, but on the twisty roads the C3 felt a little too soft. While body roll isn’t excessive, I would have preferred a slightly more focused set-up for flatter cornering. 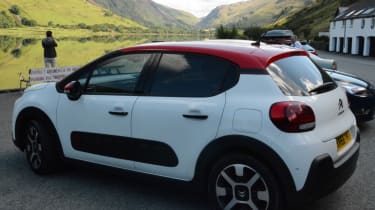 To give the car a fair chance, I woke up early on Sunday, grabbed the keys and headed out for another drive. Without the weight of three adults and several items of luggage, it felt lighter and more enjoyable to drive, but the steering still lacked the level of involvement a Ford Fiesta delivers and I struggled to get a feel for how much grip there was. That being said, I never felt like the car would understeer unexpectedly.

With the logs used up, food eaten and most of the water drunk over the weekend, the return journey was completed in more comfort. I haven’t explored all the tech on board the C3 just yet, but the TomTom-assisted sat-nav (£500) proved extremely useful by alerting us to severe delays on the M54 and recommending thatwe take the M6 Toll instead.

While a larger car would have been a better choice, the C3 didn’t miss a beat all weekend. It also showed that it’s far more versatile than you’d expect. 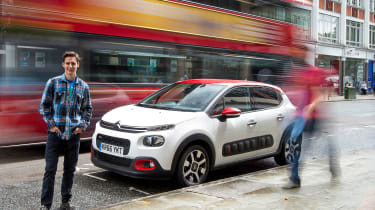 First report: Citroen C3 supermini is the talk of the town as it joins our fleet

The word ‘funky’ perfectly describes the new Citroen C3. From the overall design right down to the smallest touches, this car does things differently. The styling is far from derivative, which means the Citroen looks at home in trendy city centres and urban areas – exactly the places this latest addition to the Auto Express fleet has spent most of its time since we got the keys.

I’ve used the car mainly in and around London, which has given me an idea of how well the supermini works as a city runabout.

The C3 certainly stands out from the crowd; the £260 optional Polar White paint, red roof and black Airbumps ensure there’s no losing our Flair-spec example in a car park full of more dull and dreary models. But that’s not all that’s impressed me. 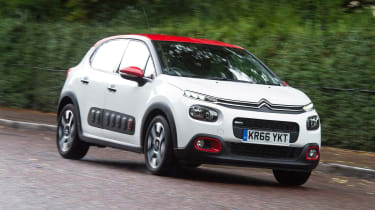 Citroen enlarged the C3 with this third-generation version, which means it’s really practical. Climb inside and there’s plenty of room, and I reckon I could just about fit my mountain bike in the 922-litre load bay with the seats folded down. More on that in later reports, but I’ve been really surprised by how spacious the new C3 is.

The 1.2-litre turbocharged three-cylinder petrol is ideal for urban driving, too. With the 1.2 PureTech 110 engine’s maximum torque of 205Nm produced low down, it’s peppy and good fun as well.

The emphasis is on comfort rather than performance, though, according to Citroen. The seats are soft and snug and the suspension set-up is ideal for London’s badly surfaced roads. Although bigger potholes or speed bumps can still thud into the cabin, the C3 feels softer than most of its supermini rivals. How the car will cope with a set of faster and twistier roads will be something for later in the summer, but for now the set-up is impressing around town.

One thing I have been less wowed by is the five-speed manual box. Second gear is a bit too long, and initially I found myself shifting up into third too soon, only for the revs to drop too low, which required another change back down to second. 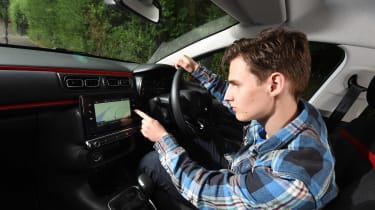 On top of that, the shift action is decidedly spongy and vague, which means I’ve struggled to engage the gear I need on a few occasions. I’ve had to give the gearlever a few good pushes before it shifts from neutral into first, which can quickly become frustrating when you’re under pressure at traffic lights in London.

However, this is a minor criticism of the Flair model I’m running. This gets Citroen’s new seven-inch touchscreen, which is a highlight, especially with the £500 optional sat-nav in our car. As our Driver Power 2017 satisfaction survey showed, cars that otherwise did well were often let down by a poor infotainment system.

The C3 was too new to feature in our latest survey, but I suspect 2018’s study will show owners to be more than impressed with the set-up, thanks to standard features such as Apple CarPlay and a reversing camera. I’ve also found the system responsive, which is great in the cut and thrust of city traffic if you need to make a detour. The sharp graphics ensure it’s easy to follow your route when you do.

A feature I’ve yet to explore is the built-in dash cam. Citroen is the first manufacturer to offer this technology as standard and given their growing popularity, it’s unlikely to be the last. We rate plenty of dash cams throughout the year at Auto Express, and I’m keen to see how the Citroen’s own device stands up.