The new Nissan Micra has lofty aspirations in the supermini class, but does it have the talent to beat the VW Polo and Citroen C3? 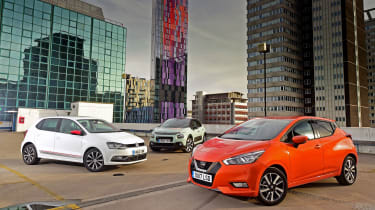 A glut of all-new superminis will hit the market this year, and the first one to take on the established contenders is the fresh Nissan Micra. It’s fair to say that the Japanese hatchback has been out of contention for class honours for more than two decades, but Nissan has now repositioned its five-door hatch at the heart of the supermini sector.

It means the Japanese firm has a lot riding on this car, with plenty of new tech, a range of downsized turbo petrol and diesel engines and a more premium cabin aiming to win sales in one of the most hotly contested markets.

However, Volkswagen has been offering this winning combination for years now with its Polo. It’s the reigning champ in the Best Supermini class at the Auto Express New Car Awards, and although we’ll see an all-new version later this year, the current model is the one the Micra has to beat.

Alongside this, the Nissan will have to fend off the challenge from Citroen and its characterful C3. Both the Polo and C3 offer good space, efficiency and kit, but can the Micra edge itself ahead of this talented duo? 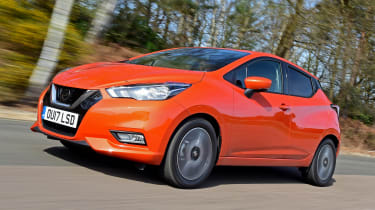 We’ve waited a while for a new Micra, but now that the Nissan is a proper small hatchback, rather than straddling the city car and supermini classes like its predecessor, the fight is on. It offers plenty of tech, striking looks and practicality to rival the best in its class. Our pictures show an N-Connecta model, but it’s the £15,115 1.0 IG-T Acenta we test here.

The Micra’s IG-T 90 0.9-litre three-cylinder turbo petrol engine has been taken from the Renault Clio, although Nissan’s engineers have recalibrated the unit here. It produces 89bhp – the same as the Polo, but is down on the Citroen’s 108bhp output. Torque is down, too, at just 140Nm and it’s produced relatively high up the rev range. 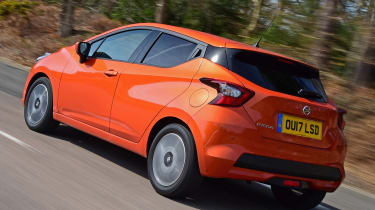 While straight-line performance isn’t the most important factor for a supermini, you have to work the Nissan’s engine harder than in its rivals, which means it’s less relaxing to drive. The Micra sprinted from 0-60mph in 10.8 seconds on test, while that low torque figure meant it trailed the Polo’s in-gear acceleration in fifth between 50-70mph, taking 14.5 seconds (3.6 seconds longer than the VW).

On a B-road or even around town you have to work the engine and gearbox more than in its rivals to keep pace with traffic, but the power delivery isn’t as smooth as in the Polo or C3. Compared with the slicker shift in the VW, the Micra’s five-speed unit feels imprecise. 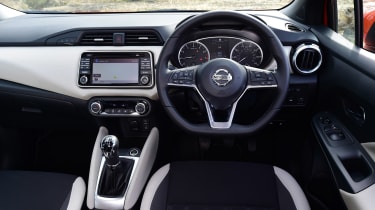 The Nissan handles sweetly enough, and all cars get the Active Ride and Active Trace Control electronic systems from the larger Qashqai. The former applies the brakes over bumps to keep the body tied down, while the latter brakes an inside wheel in corners to help stick to your chosen line.

The ride is a little pattery, with a firm edge even on smaller wheels, but it’s refined at speed. However, next to the precision of the Polo and the comfort of the C3, the Micra simply lacks sparkle.

Testers’ notes: “Nissan is targeting a younger audience with the Micra, so there are plenty of customisation options. Exterior colour accents for the bumpers, doors and wing mirrors cost £300.” 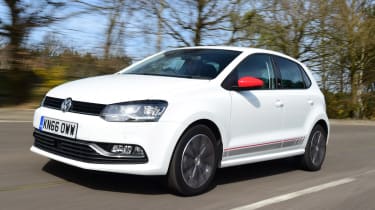 The Volkswagen Polo has dominated the supermini class ever since the facelifted model appeared in 2014. With a blend of refinement, quality, practicality and precision, it’s got all bases covered, which has allowed it to see off a host of newer rivals. Here we sample it in £15,090 1.2 TSI Match Edition guise, which delivers an impressive combination of value, kit, performance and efficiency.

VW’s tried-and-tested 1.2 TSI 90 motor is a little old hat in this company, but it’s an effective performer that’s popular with buyers. With 89bhp and 160Nm of torque, the four-cylinder unit is on a par with the Micra, but trails the more powerful C3. At the track, the eager engine pulled the Polo from 0-60mph in 9.9 seconds, which was two-tenths behind the Citroen, but nine tenths ahead of the Nissan. The Polo consolidated its advantage in-gear, where it was fastest of all in fourth and fifth gear. 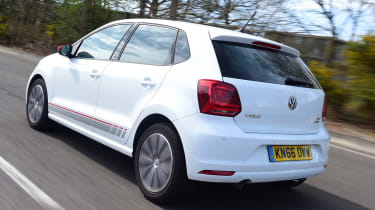 On the road, the VW feels the most eager, while its engine is smoother and quieter than the three-cylinder units of its rivals. There’s further praise for the five-speed gearbox, which benefits from a slick and precise action. It works in conjunction with the light and progressive clutch to make the Polo the easiest car to drive smoothly, particularly around town.

Even though the underpinnings aren’t at the cutting edge, thorough development means the Polo feels assured on the move. It’s not as soft as the C3, but the damping takes the edge off big bumps more effectively. Refinement is also good, with mechanical, wind and road noise kept in check, even at high speeds. It really does feel like a larger car when cruising on the motorway. 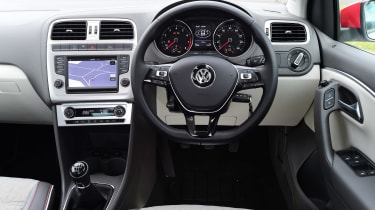 And the faster you drive the VW, the better it is. Body roll is well checked and there’s bags of grip, while the naturally weighted steering allows you to place the car accurately. The Micra isn’t far behind when it comes to agility and composure, but it lacks the Polo’s dynamic polish and excellent refinement.

Testers’ notes: “The effects of VW’s Dieselgate scandal are clear to see in the Polo line-up. There’s just one 1.4 TDI on offer, while the ultra-efficient BlueMotion model is now petrol powered.” 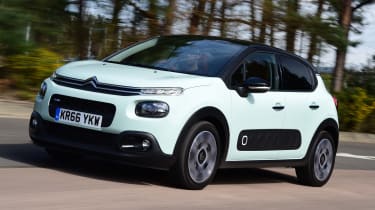 The C3 was a breath of fresh air when it arrived last year. It scaled down some of the quirky design features from the Citroen C4 Cactus crossover to give the supermini plenty of character, helping it stand out from the crowd in a busy sector. Our pictures show the range-topping Flair model, but here we test the £15,235 mid-spec Feel trim with Citroen’s PureTech 110 petrol engine. 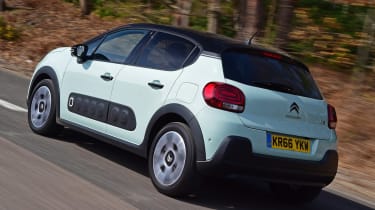 However, while the C3 feels fairly quick, elements of the package, such as the rubbery gear shift, mean it’s not as precise as the Polo to drive. The steering is light but has a natural weight, which makes it easy to drive on tight city streets, but the C3’s size does make it feel like the largest car on test. This is backed up by the least agile chassis – although the trade-off is a good level of comfort.

As long as you avoid big potholes, the Citroen’s suspension moves with the road nicely, meaning you can make surprising and relatively relaxed progress. It’s best to drive the C3 using the punch lower down in the range. The PureTech unit gets a little rougher higher up, becoming more vocal with revs. The Citroen doesn’t like to be hustled, and although there’s a respectable level of grip on offer, you can’t lean on the chassis like you can in the VW. 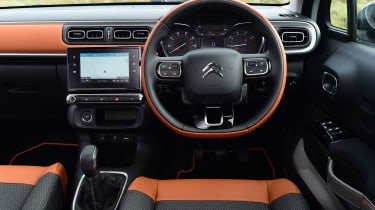 The C3 prefers a calmer approach, which fits with the car’s character – that’s why the Citroen is a convincing supermini that delivers comfort and usability with the benefit of decent performance.

Testers’ notes: “The Airbumps on the C3’s flanks should help prevent dents in car parks, but they’re only standard on the Flair model. If you want them on Feel trim, you’ll have to pay £290.” 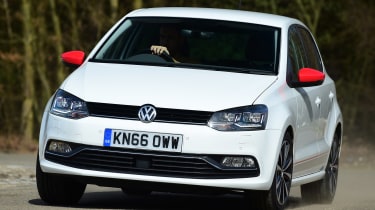 Its rivals are catching up, but the Polo is still a polished product that’s great to drive and is packed with tech. It emits the most CO2, but car tax changes mean that’s less important, while economy is on a par. It offers enough boot space for a supermini and clever packaging creates as much room as the larger Micra in the rear. Factor in rock-solid residuals and the VW retains its crown. 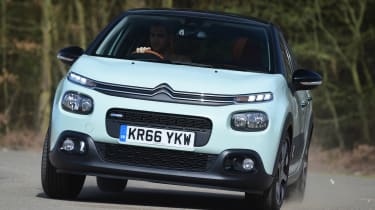 Interior quality lets the C3 down compared to its interesting design. However, it offers the most space and affordable running costs. Factor in the Citroen’s decent level of performance that makes it easy to drive, and its relaxing ride quality, and it edges ahead of the Nissan. You get a good level of kit for the money, but poor depreciation dents its appeal. 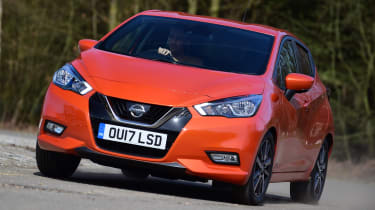 The reinvented Micra’s styling, fresher interior and improved infotainment bring it up to date. It also offers plenty of efficiency, making it a good choice for business users. However, competition in the supermini sector is fierce, and the Nissan isn’t as good to drive as the Polo or as comfortable as the C3. Some practicality drawbacks and a lack of sparkle see it finish a close third. 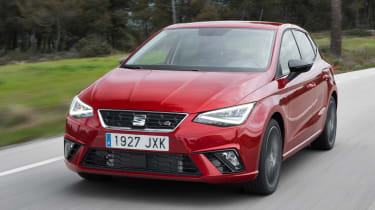 The all-new Ibiza looks ready to shake up the order. With sleek lines, an upmarket interior, plenty of tech and strong refinement, it has all the ingredients to shine. Eager 1.0 TSI in SE Tech guise is the pick of the bunch.