We drive the entry-level 1.0-litre petrol version of the Nissan Micra to see if it's the pick of the range 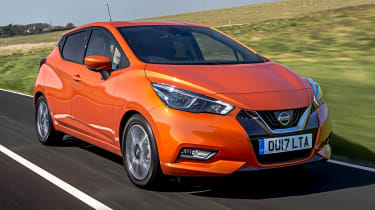 On paper, the base-engine Nissan Micra is around £1,000 cheaper than the more powerful turbocharged 0.9-litre model. But assuming you’re buying this Acenta edition on finance (and most will), this averages out at a saving of just over £20 a month over three years. If you really are going to drive your Micra around town 99 per cent of the time, then you may consider that useful petrol money. For us, though, it’s a price that we’d happily pay for the extra range of abilities offered by the more powerful engine.

The Nissan Micra made its name by offering affordable quality; a reliable, well-made supermini that was cheap to run. It has been nudged slightly upmarket with this latest generation, but you can still get back to its roots with the entry-level version, powered by a normally aspirated three-cylinder petrol engine.

It will not surprise you to learn that the raw stats on this Micra are rather modest. The 1.0-litre motor produces just 70bhp and 95Nm of torque, enough for a 0-62mph time of (wait for it - and you will) 16.9 seconds. Rapid it is not.

But it is efficient. Nissan claims official combined fuel economy of 61.4mpg, and CO2 emissions of 103g/km - so this version of the Micra could well end up on a few small vehicle fleets as companies try to minimise their tax hit. It is a step behind the more powerful 0.9-litre engine in this regard, though, because the turbocharged motor dips below the 100g/km threshold. 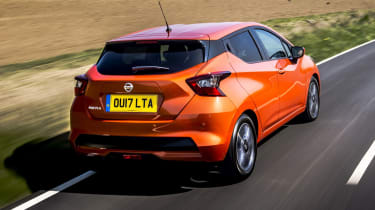 The 1.0 should be popular with private buyers too, mind, because on paper at least, it is the most affordable way into the current Micra range. This engine is available in Visia, Visia+ and Acenta trim levels, and the cheapest of those will start at just £11,995 - along with Group 1E insurance, giving it real appeal on running costs.

Even if you decide you can’t live without standard kit as easily as you can live without drag-strip performance, the Acenta version we’re testing here will cost you £14,145. Put down a 10 per cent deposit and you’ll be looking at around £180 a month over three years, based on 10,000 miles per year. That’s a considerable saving on the comparable 69bhp Fiesta, which the Acenta also trumps on spec.

On the road, the Micra has plenty of merit as a spacious city car. With no turbocharger, there’s a purity and linearity to the engine’s power delivery. So while nothing happens particularly quickly, it’s a nice enough thing to ease around urban streets. The five-speed gearbox helps here too; it’s a pleasing unit to use, with a precise shift action. 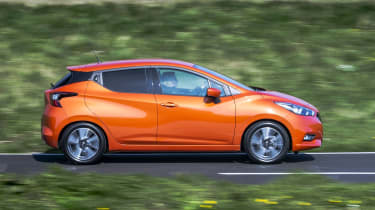 There’s just about enough shove low down in the engine range for you to change up at around 3,000rpm, which is handy because that’s the point where the three-cylinder thrum becomes most noticeable. Stay beneath that point and it’s more of a grumble than a roar; undeniably a three-pot noise, but some way off being really intrusive.

The ride is firm, at least it was on the 16-inch wheels of the Acenta edition (Visia models get 15-inchers) we tried. But there’s enough compliance for you to shimmy your way over all but the worst of urban potholes without any big thumps reaching the cabin. The steering is devoid of feel, frankly, but it’s consistently weighted, making the Micra easy to manoeuvre in city streets.

This all sounds positive enough, but the 70bhp Micra starts to stumble when you ask it to extend itself to the full gamut of supermini tasks. Even without a single extra passenger, this Micra is not particularly happy beyond 50mph; acceleration feels relaxed at best and you’d need to learn pretty quickly that overtaking in all but the clearest of conditions is not a task to be undertaken lightly. As if to reflect the fact that this is not a car for long, lolloping cruising, there’s no footrest to the left of the clutch pedal. 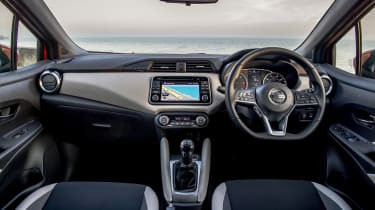 The rest of the Micra package is unchanged. That means decent amount of room up front, but sub-optimal amounts of headroom for tall adults in the rear. The 300-litre boot is par for the course, meaning it offers a useful advantage over city cars and enough for a large weekly shop, or a small buggy.

The interior finish on the Acenta is a mix of surprisingly plush and reassuringly durable. It’s basically fine, but you don’t have to look too hard to see where the pennies have been saved. Standard kit on our car includes cruise control, a digital info display between the instrument dials and air conditioning.

It also brings a seven-inch touchscreen infotainment system which incorporates Apple CarPlay to help negate the fact that there’s no built-in navigation. But it’s disappointing that Android Auto isn’t offered as well, given that system’s larger share of the smartphone market. We’re told it’s in the pipeline, but until it arrives, this continues to be a black mark against the Micra on infotainment.