The new Nissan Micra N-Sport warm hatch has arrived as part of a series of updates to the Micra range. We try it out... 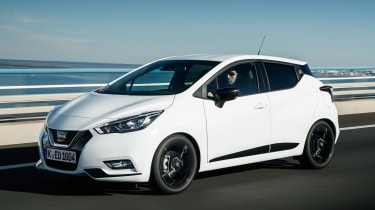 The Nissan Micra has upped its game in the face of fresh competition. The new 1.0-litre motor is key to this, replacing the sluggish and unspectacular old engine by delivering a much-needed shot in the arm. The chassis updates on this 115bhp version is the cherry on top; it’s a much better car to drive than before. But, be in no doubt, the racy looking N-Sport model is not quite the warm hatch the marketers want you to believe.

Pretty much every big player in the supermini segment now offers a mild but sporty take on its wares, and Nissan is the latest brand to enter the fray.

Step forward the new Nissan Micra N-Sport, a car designed to give the small car’s safe image a bit of a rebellious streak; a new model intended to showcase some much needed updates for the rest of the Micra range.

It slots in above the mid-grade Acenta version, boasting an similar selection of standard equipment – save for the addition of a reversing camera, rear parking sensors and folding, heated door mirrors. Sporty touches include black 17-inch alloy wheels, black exterior detailing, a chrome exhaust tip, plus Alcantara on the dashboard and seats. 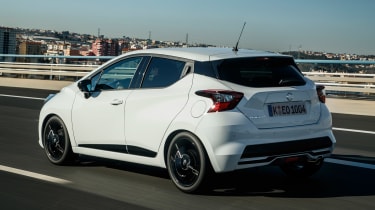 Elsewhere, the boosty, blowy 0.9-litre Renault-sourced three-cylinder engine is gone, and a new 1.0-litre turbocharged triple developed for use across the entire Renault-Nissan-Mitsubishi alliance takes its place. It gets 99bhp in its most basic guise, but there’s also a 115bhp version of the new motor, which we’re trying here for the first time.

Cars fitted with this engine also get sharper steering and revised suspension for the updated Micra, which Nissan claims takes the N-Sport into ‘warm hatch’ territory.

Take that with a pinch of salt, however. Rivals like the Volkswagen Polo and Ford Fiesta have been pushing out this kind of power for years, while many offer proper hot hatchbacks with almost twice that figure. The smoking gun is that you don’t have to opt for the N-Sport model to get this higher-power unit; it’s available in the cheaper Acenta or technology-laden range-topping Tekna models, too. 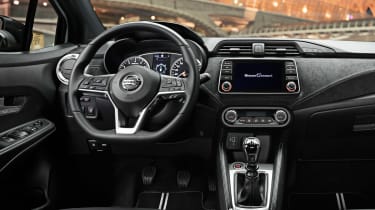 This engine is a real improvement on what was offered up before, both in 99bhp and 115bhp states of tune. The extra power means that the Micra finally has the grunt to take on TSI-engined versions of the Polo, Skoda Fabia and SEAT Ibiza, plus the benchmark EcoBoost set-up found in the Fiesta.

The Micra’s flagship engine serves up a maximum 200Nm torque on overboost. That means it’s good for 0-62mph in 9.9 seconds and a top speed of 121mph, which coincidentally are the exact same numbers quoted by the 123bhp Fiesta.

In truth, the Nissan doesn’t deliver these figures in the same sharp manner as the Ford. The Micra could be more responsive, a bit less wheezy as you push on, and the new six-speed manual gearbox could feel a bit tighter. But it’s an engine that puts the revised supermini very much on the same page as the strongly favoured Fiesta.

The 10mm lower and stiffer suspension and steering upgrades included on the 115bhp car are another tick in the box. The Micra can’t quite match the Fiesta for fun, and the Polo is more cosseting around town. But in this spec, the Micra finds a safe spot somewhere in between. The steering remains a little slack, but underneath there’s definitely an extra shade of composure on twistier roads.

It’s impressively refined at motorway cruising speeds, too. Fuel economy is quoted at 47.9mpg under WLTP rules, and while we’re still waiting for rivals to be updated to the new, more stringent standard, we suspect that to be a competitive figure.

Elsewhere, the Micra gets a new infotainment unit as part of this early-life update. It’s still not the sharpest system in the business, but a welcome upgrade nonetheless. The seven-inch unit mounted in the middle of the dashboard is slightly more responsive than before, and the search function has been streamlined. There’s a new dedicated smartphone app, and voice recognition appears, too. Apple CarPlay and Android Auto are standard on all but the base Visia grade car. 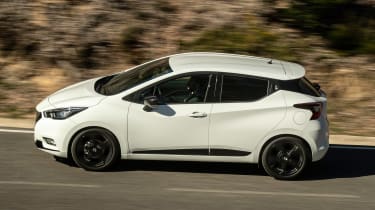 Inside, the Micra remains a fairly proportioned thing, though headroom is clipped a little by the low roofline. A 300-litre boot is strong though, and eclipses most rivals – even beating the latest Mazda 3, which sits in the class above.

As for the cost, the N-Sport’s £19,005 list price offers up no real incentive over the similarly powered Volkswagen Polo R-Line, while a Fiesta ST-Line EcoBoost 125 is ever so slightly less. Furthermore, like most mid-spec sporting superminis, it strays dangerously close to the starting price of full-fat hot hatchbacks like the Fiesta ST. To sweeten the deal, Nissan is offering zero per cent interest on monthly PCP deals, however.

Given that the chassis tweaks are linked to the 115bhp engine and not the trim, you could save more money and still bag the best driving Micra by opting for this setup in better value Acenta trim. It’s £1,700 less, but you’ll have to forego the sporty styling touches.