Can the new Mazda 3 really be a serious rival for the class-leading hatchback favourites; the VW Golf and Ford Focus? 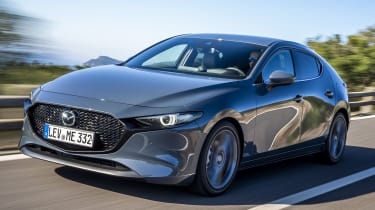 In many ways, the Mazda 3 leads its class. It’s wonderfully quiet on the move, it’s fun to drive, and the interior quality is a match for most premium brands. However, it’s not without its flaws; rear passenger space isn’t great and over the shoulder visibility is awful. Until the SkyActiv-X petrol is available, the 3 lacks power, too. The diesel is preferable to the current petrol, but in short, the 3 stays one engine away from being a brilliant car.

The family hatchback sector is one of the toughest in the new car market. Unless you’re Ford or Volkswagen, whose Focus and Golf have dominated the family hatch sector for decades, you’ll need to offer something truly unique to make a dent in the sales tables.

The new Mazda 3 stands out more than most alternatives. Our first encounter with the fourth generation model earlier in February left us impressed, but the 2.0-litre petrol engine under its bonnet wasn’t the reason.

A more powerful, high tech SkyActiv-X petrol will join later in the year and has been developed specifically for the new car’s brand new platform, but for now, is the diesel engine driven here - which is predicted to only take up a small percentage of Mazda 3 sales overall - the pick of the current range? 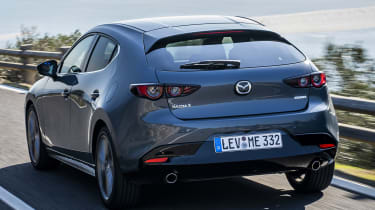 When we tried the petrol engine we longed for more power and torque, particularly low down the rev range. From this point of view, the 1.8-litre diesel is a noticeable step up. The hefty peak torque comes in from just 1,500rpm, so unlike the petrol, the diesel pulls along with little effort in higher gears.

It’s by no means perfect though. The main issue is turbo lag: re-apply the throttle after a gear change, and you feel a delay as the turbine spools up before the boost arrives. It makes it tricky to drive smoothly, which is a shame because the manual gearbox it’s paired to is up with the Honda Civic’s as the best in this class.

The turbo lag could be more easily forgiven if it was quick, but it’s okay at best. A 10.3-second 0-62mph time is on a par with the 1.6 TDI unit that kicks off the Golf’s diesel range. VW, however, offers more powerful alternatives for those that want it, whereas this is all you get from Mazda.

On the plus side, It lives up to its frugal promises: on a test route consisting of mostly twisty Portuguese coastal roads, with a little town and motorway driving thrown in, we averaged an impressive 51.3mpg, making the official 55.4mpg figure seem completely achievable with conventional use. This is helped in part by a mild hybrid system, which can harvest energy when decelerating to reduce strain on the engine under acceleration. It results in near instant stop/start implementation, too.

Once the Mazda 3 gets a better engine, it’ll surely be considered one of the true driver’s cars in the class. It’s a joy to drive on a bendy road: there is a little more body roll than in some rivals, but this helps to communicate the car’s limits of its beautifully balanced chassis more clearly. In some ways, there’s very much the feel of a front-wheel drive MX-5 to it.

Perhaps what comes as most of a surprise is just how quiet it is. Wind and road noise are brilliantly suppressed from the cabin. The ride becomes slightly fidgety on the largest 18-inch wheels, but fewer knocking noises make their way into the cabin than in, say, a Golf. 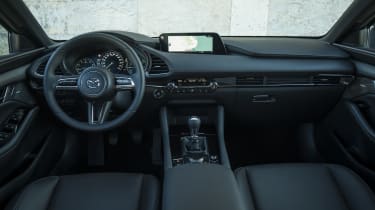 There are five trim levels to choose from, and all come generously equipped. All cars get LED headlights and tail lights, heated door mirrors, rear parking sensors, lane-keep assist and radar-guided cruise control. The 8.8-inch infotainment system is great, too: the graphics are sharp, and while it lacks a touchscreen, the BMW-style click wheel feels solid and works well.

Fortunately, blind spot monitoring is also standard throughout, because over the shoulder visibility is terrible. Despite the tech offering some safety net, the tiny rear windows and vast C-pillar makes it tricky to manoeuvre when parking or changing lanes.

While taste is subjective, it doesn’t seem too much of a stretch to say that Mazda has designed the prettiest C Segment hatchback money can buy right now. It’s sharp, uncluttered and very smartly proportioned; it makes most of its rivals look a little dreary in comparison. 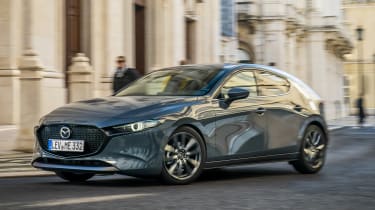 The interior follows a similar minimalist theme to the outside. It’s not at the expense of ergonomics either - the driving position is perfect and there’s loads of adjustment in both the seat and the gorgeous steering wheel. But it’s the quality that arguably impresses even more than the looks: it’s tricky to find scratchy, nasty plastic anywhere, with the majority of surfaces covered in leather (faux or otherwise) squidgy rubberised materials or chromed switchgear. Never mind Golf quality - the Mazda 3 is at least as good as the BMW 1 Series in this area.

Like the BMW, however, it isn’t the most spacious car of this type. Back seat passengers of above average adult height will grumble about a lack of headroom, and the small back windows make it feel claustrophobic. The 351-litre boot is slightly smaller than both a Golf and a Focus, but it’s hampered most by the small opening and high load lip.

Prices for the new Mazda 3 diesel start from £22,395. That matches up very closely with the equivalent Golf 1.6 TDI SE Navigation, which costs £22,005. If you can put up with the lack of practicality and you don’t live near any oblique junctions, the Mazda 3 might just be the best reason to head away from either the typical pair of class-leaders.