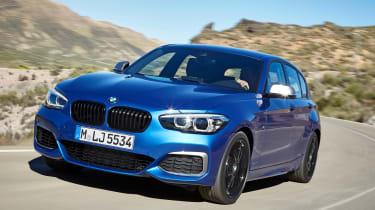 BMW has revealed a raft of upgrades for the 1 Series, including minor styling tweaks inside and out, infotainment and technology upgrades, and an expansion of the range with three new special-edition models. The new, refreshed 1 Series will arrive on sale in July.

The exterior styling tweaks will arrive on the three new special-edition models only – the Edition Sport Line Shadow, Edition M Sport Shadow and BMW M140i Edition Shadow. There are no new panels, but these ‘Shadow’ cars stand out with Kidney grille frames painted in black, plus black inserts in the LED headlights and smoky, darker LED taillights. The exhaust tips are tinted black on these cars as well, while two new paint colour finishes can be applied to the body – Seaside Blue and Sunset Orange. 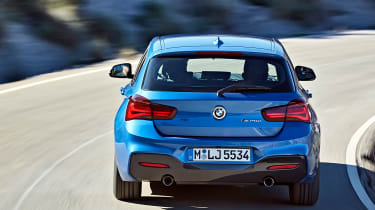 Changes inside are more noticeable and will feature on every 1 Series, not just the Shadow cars. A redesigned instrument binnacle with a black panel is joined by new gloss-black housing for the controls on the centre console. Other minor tweaks include redesigned air vents, a sliding cover for the cupholder plus chrome trim for the window buttons. New interior trim options make the cut, too. 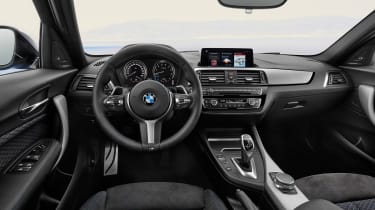 In terms of cabin tech, the big news is an upgraded infotainment setup with the latest iDrive system, featuring a touchpad integrated into the controller and a new user interface. Those who spec the Professional navigation system get an 8.8-inch touchscreen display with voice controls.

Fresh connectivity features form a part of the 2017 1 Series upgrades too. BMW ConnectedDrive services mean that the 1 Series is available with real-time traffic and on-street parking information. Microsoft Exchange for emails, calendars and contacts is a part of the package as well.

Under the bonnet things remain unchanged, but big changes under the skin could arrive next year with an all-new third generation model. We’ve spied the 2018 1 Series undergoing early assessment, and you can read everything we know so far here.

What do you think of the upgraded 1 Series? Let us know in the comments...

The best hot hatches offer giant-killing performance and a gripping drive, all wrapped in a user-friendly package
BMW 1 Series vs Mercedes A-Class vs Volkswagen Golf