The BMW 1 Series hatch is hotter than ever in M140i guise with 335bhp pumping through those rear wheels. But is it any good? 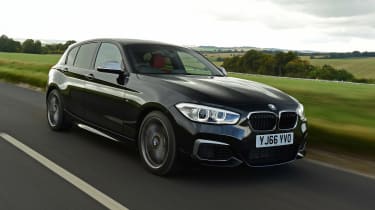 The BMW M140i has had a name change, and with it comes extra power and slightly lower running costs. Keen drivers will love the hatchback’s focused handling, smooth six-cylinder engine and sweet chassis, but anyone can appreciate its upmarket interior and exciting exhaust note. It’s not cheap, but for what could be the last rear-drive straight-six hot hatch, many will be happy to pay that price.

BMW’s round of updates for 2016 saw refreshed versions of its 1 and 2 Series ranges, including what was previously called the M135i. It’s now called the BMW M140i, but not a huge amount has changed. It’s still a powerful, rear-drive alternative to today’s range of all-wheel-drive mega hatches, and still comes with a choice of three and five-door bodystyles.

The new name does mean something, though: more power for the 3.0-litre straight-six turbo engine, up to 335bhp from 321bhp. While it’s a small difference, there’s also an extra 50Nm of torque, which helps make it feel more powerful when accelerating through the gears.

Not that the M140i was lacking in that department anyway – as the smooth and great-sounding six provides a huge boost, whatever the revs. It’ll blast through the gears with an epic soundtrack, yet is civilised when you need it to be as well. 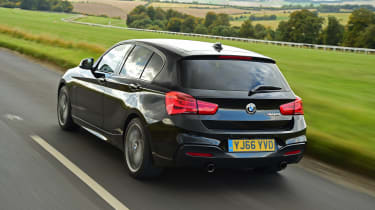 It’s possible that we’ll never see a six-cylinder hot hatchback ever again after the M140i disappears, as the trend for downsized four-cylinder engines continues at full pace. That’s a shame, as it’s endlessly more characterful than the four-pot units used in so many of its rivals.

It’s a similar story with the chassis too, and while Alfa Romeo has told us it’s planning a rear-wheel-drive Giulietta, the days of the rear-driven hot hatches are nearing an end. The M140i is balanced and feels alive on the road, with just enough slip to give it a lively edge. The steering is a bit too light, but it’s accurate enough.

Even though the eight-speed automatic fitted to our test car is a good box, with smooth, fast shifts, we’d still go for the manual. It’s more engaging, cheaper and suits the car’s superb engine even better. 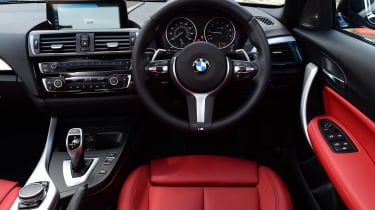 The comfortable and sporty driving position makes it feel special from behind the wheel as well, and the interior design cocoons you. It feels upmarket, and the new infotainment system is excellent. Sat-nav is standard – as it is on all BMWs – and the heads-up widescreen display means it’s easy to use on the move.

Other improvements for the M140i include fuel economy, which is up to 39.8mpg from 37.7mpg. It’s hardly monumental, and the BMW is still quite expensive to run, but considering BMW’s avoidance of a smaller, less characterful engine, it’s a trade-off many will be happy to make. It’s cheaper to tax too, now emitting 163g/km of CO2.

With a 360-litre boot (and of course easily-accessible rear seats), the M140i hatch is much more practical than its M240i sister car. It’s bigger than a Volkswagen Golf R too, which has a 343-litre boot compromised by its grippy 4x4 system. The Golf’s smoother ride and practical interior means it’s easier to live with day-to-day, though.

There are a huge amount of rivals for the M140i, which is great for buyers. The BMW will suit those after a great engine and chassis combination, while the Honda Civic Type R will appeal to track day fans - and the Ford Focus RS is a great value mix of both. All are great cars, and the M140i still sits proudly among them.