As expected, the £30,995 price tag places the new Honda Civic Type R right in the heart of the latest hot hatch showdown. Rivals for the latest hot Honda include all-wheel-drive hot hatches such as the £32,265, 345bhp Ford Focus RS and the recently updated Volkswagen Golf R, now developing 306bhp and priced higher at £33,935.

For the second time in as many years the Honda Civic Type R is the fastest front-wheel-drive car around the Nurburgring race track.

The new 316bhp Type R model is based on the tenth-generation version of Honda’s Civic family hatchback and has completed the lap in 7:43.8s, meaning it re-takes its crown from the Volkswagen Golf GTI Clubsport S by just over three seconds.

Though a development car fitted with a roll cage set the headline lap, Honda claims it is representative of what is achievable with the new Civic Type R production model that goes on sale later this year. The new car is almost seven seconds a lap faster around the famous German circuit than its predecessor, which clocked a 7:50.63s back in 2015.

The new Honda Civic Type R arrives just two years on from the outgoing Type R Civic, and will be built here in the UK at the company’s Swindon based manufacturing plant for worldwide export.

While it’s based on the 10th-generation Civic, it’s actually the tenth Honda overall to wear the famed Type R badge since the performance brand’s inception in 1992. With this new model, Honda has aimed for improvements across the board – overall dynamic performance, high-speed ability and how it drives on track are all targeted for improvement. 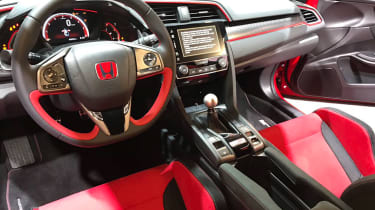 Based on the new architecture that underpins the regular Civic hatchback, the Type R is powered by a turbocharged 2.0-litre four-cylinder VTEC engine, giving 316bhp – an increase of 10bhp over the outgoing model - and 400Nm of torque. Power is transmitted to the road via a new six-speed manual box and front-wheel drive.

Honda will also attempt to reclaim the Nürburgring lap record for a front-wheel-drive production car. The Volkswagen Golf Clubsport S is the current record-holder with a time of seven minutes and 49 seconds – 1.4 seconds faster than the previous Civic Type R.

Type R project leader Hideki Kakinuma told Auto Express that four-wheel drive was never considered as an option for the hot Civic, despite rivals such as the Ford Focus RS and VW Golf R using it. Performance figures have yet to be announced, but we can expect an improvement over the outgoing Type R’s 0-62mph time of 5.7 seconds.

In a bid to help broaden the appeal of the Type R, Honda has also fitted the new model with adaptive dampers and a range of driving modes for the first time. ‘Comfort’, ‘Sport’ and track-focused ‘R+’ modes alter the steering, throttle, damper and gearshift response. Another new feature is the addition of a rev-matching function, which automatically blips the throttle on downshifts to help smooth gearchanges and maintain momentum. 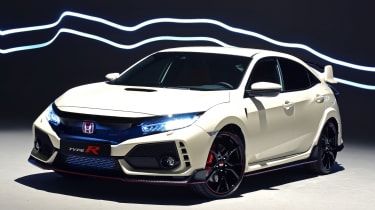 The added strengthening to the body, paired with the new chassis, also means that torsional rigidity has been increased by 38 per cent. And there’s been an improvement in weight distribution, which Honda says will help make the Type R “deliver the most rewarding drive in the hot-hatch segment”.

The suspension comprises MacPherson struts at the front and an independent multi-link set-up at the rear with strengthened suspension arms. One feature carried over from the outgoing Type R is the high-performance Brembo braking system.

Visually, the new Type R retains its trademark extrovert styling, but Honda claims the new model has a ‘more comprehensive aerodynamic package’ than its predecessor. A smoother underbody, front air curtain and vortex generators on the roof have been added, along with a three-piece exhaust set-up. Alloy wheels as large as 20 inches are also available.

There are more changes inside; the basic dashboard architecture has been carried over from the regular Civic, but Honda has dropped the seating position by 50mm to give a sportier and more involving feel behind the wheel.

What do you think of the new Honda Civic Type R? Let us know in the comments section...