The fastest-ever Golf GTI is already a collector’s item, but it’s also the most capable version ever. While it looks like a stripped-out track car on the inside, the Clubsport S is brilliant to drive on the road, ramping up what the standard car offers with even more involvement and a surprising amount of refinement. If you can live with the lack of rear seats, you’ll love it. What a way to mark 40 years of the GTI.

It's been 40 years since the first Volkswagen Golf GTI, and VW is celebrating its anniversary with the ultimate incarnation, the Golf GTI Edition 40 Clubsport S. It's derived from the GTI Clubsport Edition 40 that was launched in 2016, and it's a stripped-out version that held the front-wheel-drive hatch lap record at the Nurburgring Nordschliefe circuit before it was vested by the Honda Civic Type R.

Because that track is notoriously bumpy, VW's engineers had to tune the suspension to cope, and as a result, it also works wonderfully on bumpy UK roads. Adaptive dampers are standard, and when you set the car's Driver Profile Selection to Nurburgring mode, it keeps the dampers supple, but the engine and chassis are sharp. But even if you select Race mode, the S is still bearable. The firmer dampers cut body roll to a minimum, and there’s plenty of grip, as the Clubsport S gets 19-inch lightweight alloys wrapped in track-focused Michelin Pilot Sport Cup 2 tyres.

The standard Golf GTI uses the VW Group's tried-and-tested 2.0 TSI turbo petrol, and in the Clubsport S it's tuned to make 306bhp. Rev it hard, and the sports exhaust creates an addictive whoosh, while every upshift of the six-speed gearbox is accompanied by a crack from the exhaust. The 0-62mph sprint takes 5.8 seconds, while top speed is 165mph.

And while those numbers are impressive, it’s the way the Clubsport S handles that really stands out. As with all fast Golfs, the steering is precise, but the Clubsport S has more feel and weight than usual, which makes it a more engaging and approachable car to drive quickly, despite its stripped-out, more responsive nature. 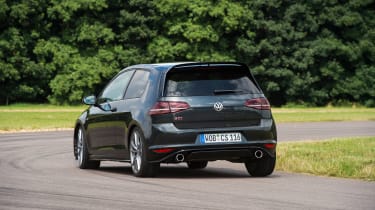 The S version is 30kg lighter than the standard GTI Clubsport, with lighter wheels, an aluminium front subframe and the lack of rear seats contributing to this. In place of the back seats is a luggage net, while a chassis-stiffening brace stretches between the rear suspension tops.

Up front is a pair of figure-hugging bucket seats, but apart from these and the Alcantara-trimmed steering wheel, the Clubsport S looks exactly the same as the standard Golf GTI. That's no bad thing, because it’s just as well built as a normal Golf, and it’s even impressively refined on the move, too.