We drive Volkswagen’s latest hot Golf celebrating the anniversary of the GTI name. Can it deliver as much as the superb Clubsport S? 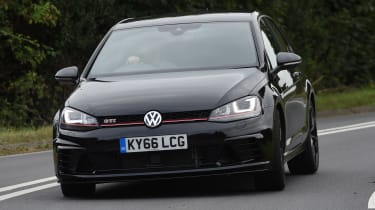 If you’re a GTI enthusiast who missed out on a Clubsport S, settling for the regular Clubsport Edition 40 is no hardship. It’s a significant upgrade on a standard GTI, feeling faster and more agile, but not too hardcore for everyday use. It’s not the best value Golf around, though; a Golf R is similarly priced and is undoubtedly more capable as an all-rounder, while a number of rivals are faster and cheaper. Still, it’s a largely impressive bit of kit.

We were mightily impressed with the 306bhp VW Golf GTI Clubsport S, but great though that car is, all of the 150 UK examples have already been snapped up. Happily, there’s another new limited-edition hot Golf to satisfy those who crave the ultimate GTI, and we’ve driven it in right-hand drive form for the first time.

The Clubsport Edition 40, so named to mark 40 years of the GTI nameplate on the Golf, carries on a tradition of run-out GTI anniversary models launched every five years since 2001. Enthusiasts stand a better chance of getting hold of one than they did with the Golf Clubsport S, as 1,000 examples will be brought over here. At £32,350, our DSG-equipped three-door adds just under £3,500 to the price of an equivalent ‘standard’ GTI. So what are you paying for other than a numbered plaque on the door? 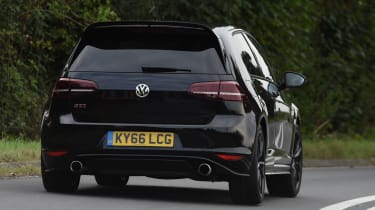 Inside, there’s lashings of Alcantara on the steering wheel and gear lever, which makes both pleasing to the touch. Our car also featured a pair of fantastic part-Alcantara bucket seats, which are more comfortable than you’d expect, although they are a £1,350 option and force you to ditch the PreCrash occupant protection system.

These styling trinkets are typical of a special-edition model, but the powertrain upgrades are more important. The EA888 2.0-litre turbocharged petrol engine is boosted from 227bhp to 261bhp, but uniquely it also has a special ‘overboost’ function that adds another 25bhp for 10 second bursts of throttle. While that may seem a little contrived given that the SEAT Leon Cupra 290 offers the same output (from the same engine) all of the time, it’s better than using a fiddly push-button mode to access full power. Although VW won’t tell you this, concealing that 25bhp in a quick spurt overboost mode is a deliberate ploy to ensure that the Clubsport doesn’t quite tread on the toes of the 296bhp, but heavier, Golf R.

Unsurprisingly, it feels considerably faster than the standard GTI when you push it. It has the same torque output as that car, so doesn’t feel much quicker at the lower ends of the rev range, but above 4,500rpm the Clubsport pulls with impressively strong vigour right to the redline. The DSG gearbox fires through the ratios as rapidly as it always has, too.

It even sounds good, particularly when the synthetic but realistic sound generator is set to Sport. But what makes the Golf so appealing is how docile it remains under low throttle inputs – it feels no less smooth and easy to drive than the standard car. It’s not quite as much of a giant-killer as a Golf R, though - just as the figures suggest. 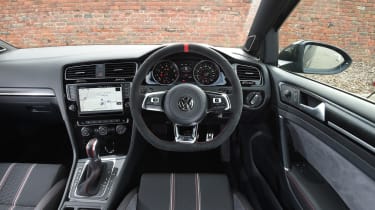 The GTI Clubsport also gets a bespoke suspension setup, with retuned springs and dampers and beefier bump stops aimed at improving responsiveness and agility.  The standard GTI is by no means loose in the bends, but get the Clubsport on a twisting B-road and the changes are immediately apparent. The whole car feels more poised and sharp; it turns in more keenly and there’s barely any roll. The steering feels meaty and confidence-inspiring, if not quite as direct as in rivals like the Honda Civic Type R.

The Michelin Pilot Super Sport Cup 2 tyres of our test car, combined with the front differential lock, also offer limpet-like grip in quick corners. In the dry, we suspect even a well-driven Golf R would struggle to get away, but in the wet it’s likely to be a different story. 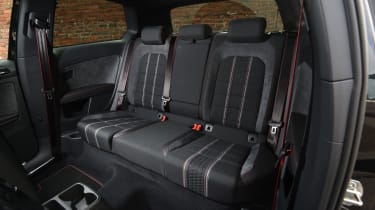 The Clubsport struggles to get all of its power down in first gear without spinning its wheels even in the dry, and damp tarmac will make this even worse. Still, at least the Clubsport isn’t too compromised day-to-day; it’s definitely firmer than a standard GTI, which causes noticeable stiffness on rough urban roads, but out of town it’s impressively composed and refined. Our car was fitted with the optional Dynamic Chassis Control with adaptive dampers, however, so that may not necessarily be the case across-the-board.