We get our first taste of the all-new Mk10 Honda Civic, but is it a threat to the best family hatchbacks on the market?

Honda could have revolutionised the new Civic simply by fitting a fresh set of engines. However, by basing it on a new lightweight and highly rigid platform, the Japanese brand has created a family hatchback that is barely recognisable from its predecessor. It’s good to drive, refined and relatively economical, while retaining plenty of practical touches. It’s not as well built as a VW Golf, and a Vauxhall Astra is more rewarding from behind the wheel – but the 10th-generation Civic is now a credible rival to the best cars in its class.

In December last year, Honda built its 100 millionth car. While the CR-V retained its title as the world’s best selling SUV, of the 4.7m models that rolled off the manufacturer’s various production lines in 2016, a staggering 620,000 wore the Civic badge.

Now in its 10th generation, the family-focused hatchback has come a long way since it was first launched in 1972. Each incarnation of the Civic has seen various region-specific variations come and go, without any real cohesion between what you buy here and what sells in showrooms across America or elsewhere. 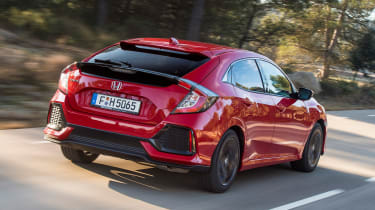 With the latest version of the car, however, Honda has pooled resources to create a dedicated team for the very first ‘global’ Civic. One third of Honda’s entire research and development budget has gone into the new Civic, to create a car that large project leader Mitsuru Kariya describes as “solid, sleek and fun to use”.

Built in Swindon and tested throughout Europe, the new Honda Civic gets a completely new platform, new engines, and new transmissions. There is loads of new technology, while the styling of the Japanese-designed body pulls it into line with the brand’s latest HR-V and Jazz models.

With no diesel engine available from launch, it’s this 1.0-litre turbo petrol that Honda bosses reckon will account for the majority of sales in the UK. The 1.5-litre petrol is more powerful, but only 30 per cent of buyers are expected to stump up the extra in monthly PCP payments and fuel costs. 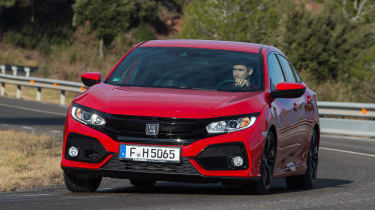 The 1.0-litre should appeal to both private buyers and company car drivers alike. SE versions emit 110g/km of CO2, but upgrade to the bigger wheels of the SR tested here and those numbers jump to 117g/km. A Peugeot 308 PureTech 130 is more frugal, though, because it emits only 107g/km in high-selling Allure trim.

On the road the new Civic is barely recognisable from its predecessor. New multi-link rear suspension means body control is good, while comfort on rougher roads makes the hatchback an impressive long distance cruiser.

The steering is consistently weighted and though not brimming with feel, it is direct. The level of grip is decent, too; on our twisting route through the hills above Barcelona the new Civic felt planted and controlled, unfazed by tighter bends and uneven surfaces. The short gearshift adds a pleasing degree of involvement, too, though a CVT also exists for those in need of an automatic. 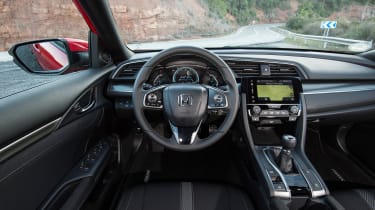 The engine is a gem. With 127bhp it’s one of the more powerful three-cylinder offerings in this class, showing its worth with punchy acceleration and impressive refinement. Our car suffered more in terms of wind and road noise, though, with noticeable roar from its 17-inch wheels.

Like the old car, the new Civic should prove practical enough for young families. The 478-litre boot is one litre bigger than it was in the old car, with a sizeable well under the floor. The total volume with the rear seats folded is slightly smaller but it should suffice for the occasional trip to the tip. In fact, the capacities are almost identical to those of the current Volkswagen Golf.

Space in the back is good, although the sloping roofline means taller adults might struggle for headroom. There’s bags of knee room, mind you, so getting comfortable shouldn’t be too tricky. The cabin is filled with practical touches – from the slimline parcel shelf that retracts sideways to save space, to the deep central cubby and wire-tidying clips ahead of the gear lever.

That new suspension means this 10th-generation Civic loses out on the old car’s innovative Magic Seats. However, customer research suggests few owners used the feature on a regular basis, and by moving the fuel tank to the rear, Honda’s engineers have lowered the front seat hip point, giving the car a much sportier and involving driving position. While the Civic takes with one hand, then, it gives with another. 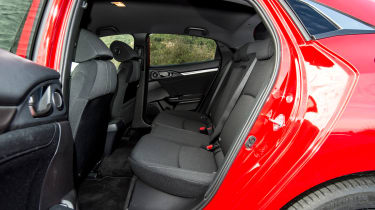 Standard kit levels are good; our mid-range SR brings dual-zone climate control, auto lights and wipers and those 17-inch wheels as standard. It also benefits from a bigger screen, as well as Apple CarPlay and Android Auto connectivity. The infotainment set-up still trails its VW Group rivals in terms of functionality and usability, but there are myriad features to keep you entertained.

There is an entry-level S model, but Honda is calling it a “homologation exercise” – expecting very few buyers to bother with the basic trim. SE cars get Bluetooth, LED daytime running lights and smaller 16-inch wheels. Bizarrely, the faster 1.5 uses a different naming structure, with Sport, Sport Plus and Prestige specs. Our SR is roughly comparable with the Sport model, commanding a £2,290 premium for the larger engine.