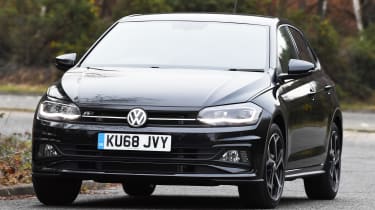 The new Volkswagen Polo R-Line mixes low running costs with a dose of sporting style. While it isn’t as fun to drive as a Ford Fiesta or as fast as a Polo GTI, it sums up everything we love about the standard car – in a racier package. It is expensive, however, which largely negates the benefit of those low insurance premiums and cheaper tax bills. Cheaper models offer much better value for money.

In 2017, Volkswagen launched an all-new Polo supermini – bookending its evergreen small car range with a selection of turbocharged petrol engines. At the bottom laid a selection of downsized three-cylinder motors, while at the top sat the punchy Polo GTI.

But what if you want something with a bit of fizz, but can’t stretch to VW’s hot hatch flagship? This all-new Polo R-Line could be the answer.

Designed to offer the visual appeal of the high-end GTI but without the associated running costs, the R-Line is available with a choice of two lower-power (94bhp or 113bhp) petrol engines. Both are based around the tried and tested 1.0-litre TSI – and it’s the latter we’re testing here for the first time. 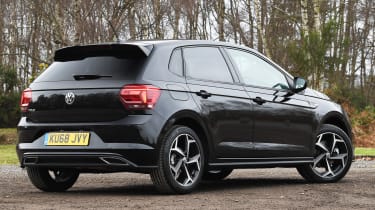 All R-Line models get unique styling, gloss black detailing, tinted rear windows and a sporty rear diffuser. There are special badges inside and out, alongside branded sports seats, R-Line sill plates and stainless steel pedals. Every version also gets air-con and all-round parking sensors, as well as an eight-inch touchscreen with Apple CarPlay and Android Auto.

Let’s first look at how much this Polo R-Line will cost you to buy and run. Fitted with the range-topping engine and DSG auto box, our car has a list price of £20,660; around £750 more than an equivalent SE L (or £12 per month) – but just £860 less than the much quicker Polo GTI. Cheaper SE and Polo Beats models are also available.

But while the R-Line might look expensive on paper, it trumps its GTI sibling hands down when it comes to fuel economy and CO2 emissions. You can reasonably expect at least 10mpg more from this R-Line model, and while the GTI is currently undergoing WLTP assessment, it’s likely to cost business users considerably more when it comes to Benefit in Kind company car tax.

Arguably the biggest difference, however, will be with regard to insurance premiums. The R-Line – even in top-spec 115PS DSG guise – falls into group 12, whereas the GTI sits in group 26. That’ll be a massive factor for younger drivers, who will likely be drawn to the cheaper car’s similarly sportier styling. 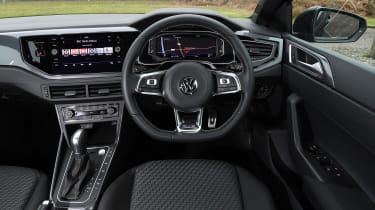 But if you can afford a little more per month, should you step up to the feisty Polo GTI, or does the R-Line do enough to satisfy the inner child of any wannabe boy racer?

Well, while it doesn’t feel enormously quick off the mark – you can blame the DSG box’s eco-focused gearing for that – it’s surprisingly punchy from a rolling start. Join a motorway from 40mph and the 1.0-litre TSI is pleasingly brisk, making light work of quick lane changes and spontaneous overtakes.

It isn’t as sharp as the GTI, however, and continues to trail the bog-standard Ford Fiesta for driving fun. The Polo doesn’t roll too much in the bends, but it simply can’t match its rival’s superior body control and crisp steering; the Polo’s set-up is just too light to offer any real feedback. 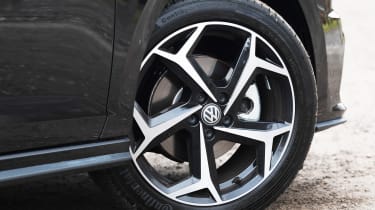 Our car’s optional 17-inch wheels (you get 16s as standard on R-Line) didn’t do the Polo’s usually impressive refinement any favours either. While the upgraded rims look great, road noise proved particularly tiresome on rougher sections of road. The ride doesn’t appear too compromised, however, offering largely plush damping on most surfaces. We’d stick with the smoother manual transmission, too; the DSG can be jerky – especially with the stop-start system engaged.

Of course, like all new Polos, the R-Line feels suitably plush inside. It sets the benchmark in this class – feeling even better built than its Audi A1 sibling. With our test model’s optional Active Info Display (just £325), it easily rivals higher-end Golf models for in-car tech.