In the aftermath of the Ford Fiesta ST’s arrival, the latest VW Polo GTI lays its cards on the table

The latest Volkswagen Polo GTI is an accomplished hot supermini. It feels like a forgiving hot hatch that’ll be very easy to live with, while the tech-filled interior sets a high benchmark in this class. Bought on these criteria, you won’t be disappointed. It’s not the last word in excitement, however; for outright thrills the latest Ford Fiesta ST has the edge.

It’s been a good a year for fans of hot superminis. So far, we’ve seen a new Ford Fiesta ST, a fresh Suzuki Swift Sport, and an updated MINI Cooper S arrive in showrooms. Not to be left out, Volkswagen has just launched its new Polo GTI in the UK, too.

An understudy to the larger Golf GTI, the hot Polo sits above the dinky up! GTI on the middle rung of VW’s performance car ladder. Previous incarnations have never quite hit the spot, though – however plush, they were outgunned on a twisty road by cars like the Renaultsport Clio and outgoing Fiesta ST.

It’s something Volkswagen has been keen to resolve with this latest Polo GTI, however. But upping the excitement without losing the comfort and usability of the evergreen standard car is no easy task. 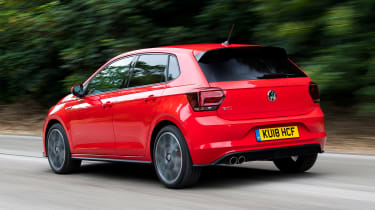 One aspect of the Polo GTI that stands out is its engine. Going against the downsizing trend, the new Volkswagen gets a 2.0-litre turbocharged petrol lump under the bonnet. It’s the same engine used in the Golf GTI, in fact, though power is capped at 197bhp, with 320Nm of torque on tap.

The 0-62mph sprint comes in at 6.7 seconds. There’s no doubting that the performance is there thanks to some impressive torque reserves low and mid-way through the Polo’s rev range. But, with a six-speed DSG gearbox sending power to the front wheels, the powertrain feels decidedly unstressed.

It never really sings, and nudging it towards the final third of the redline sees the torque disappear quite quickly. This is a powerful unit that delivers competent, if slightly unexciting performance, time after time. You could live with it quite easily day-to-day, but wringing it out on a B-road leaves you wishing for a bit more character. A six-speed manual version is due later, which should inject a little more involvement into the GTI package.

Selectable driving modes alter the Polo GTI’s character, though it feels like the task of transforming how responsive the car is feels, falls largely to the transmission. Instead of coaxing out a tangible change in the engine’s character, the DSG gearbox simply holds on to its ratios for longer.

All UK cars are equipped with Sport Select suspension with two damping settings. But, by and large, the different modes don’t affect the Polo GTI’s behaviour all that much. Stability and grip is excellent; bung the Polo GTI into a tight, on-camber corner, and it bites into the tarmac and stays admirably flat. 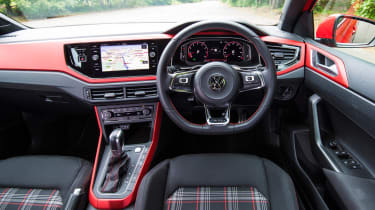 You’ll run out of confidence in the steering before you do the chassis. Feeling through the large steering wheel isn’t the most communicative, and its feedback begins to fade as you approach the realms of understeer. The Polo isn’t available with a limited-slip differential, either, so you can’t always pin the throttle with confidence.

But sitting on a modified version of the VW Group’s MQB platform, it feels remarkably Golf-like to drive when you’re not bothered about pushing on hard. It’s got a pliant ride, and you can put the most noteworthy bumps down to the 18-inch wheels and low-profile tyres.

It’s a pleasant place to sit, too. The standard Polo sets the benchmark for interior quality in this segment, and the hot hatch continues in the same vein. It feels smart, with the same modern layout and soft-touch dashboard – tweaked with some trademark tartan trinkets. The optional digital dials give Volkswagen’s supermini a tech-focused edge, while the upgraded eight-inch central display is as sharp to operate as you’d expect.