Order books for the all-new Volkswagen Polo are open now, with the most basic model priced from £13,885 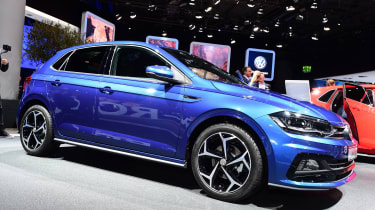 The new Polo goes on sale from £13,885, with a seven trim level strong line-up on offer for UK buyers. That starting price bags an entry level Polo S, which is only available with a 1.0-litre three-cylinder petrol engine producing 64bhp, driving the front wheels through a five-speed manual gearbox. As standard, the most basic Polo receives an eight-inch infotainment screen with DAB radio, air conditioning, autonomous emergency braking, and automatic headlights with daytime running lights.

SE cars start from £14,630, again with the 64bhp 1.0-litre engine. The new generation 1.0-litre TSI unit is available with this trim grade, however, and is priced from £15,930. A 1.6-litre TDI unit will also be available, but prices for this have not yet been revealed. SE cars build on the solitary S model with 15-inch alloy wheels, a leather multifunction steering wheel, an alarm system, plus Car-Net app connectivity. 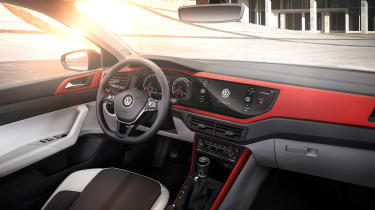 Beats models are up next, following the same engine and gearbox combination as SE and priced from £15,680. 16-inch alloy wheels are included alongside front fog lights with cornering function, tinted rear passenger windows, Beats decals and a red velvet finish on the dashboard, plus a 300-watt sound system.

Prices for the rest of the range have yet to be revealed, but UK buyers will also be offered the Polo in SEL, R-Line, GTI and GTI+ trims. SEL cars receive satellite navigation as standard alongside two zone climate control, front and rear parking sensors and automatic wipers, while R-Line models receive a sporty looking bodykit. R-Line is the only trim level available with the firm’s new 1.5-litre TSI petrol engine too, producing 148bhp.

Those who pluck for the new 197bhp Polo GTI will be confronted with two choices. The standard Polo GTI keeps the equipment of SEL and R-Line, adding 17-inch alloy wheels, a GTI bodykit, lowered sports suspension and an electronic differential. GTI+ on the other hand will be loaded with tech, including keyless entry with a starter button, LED headlights, adaptive cruise control and VW’s Active Info Display replacing the analogue dials.

New Volkswagen Polo: all the details

The sixth-generation Volkswagen Polo made its public debut at the Frankfurt Motor Show, and the all-new model looks set to continue as a front-runner in the supermini class. The Polo's design is more mature, and it's considerably bigger than before, while a new engine range will ensure the Polo has the talent to take on newly launched rivals such as the SEAT Ibiza and Ford Fiesta.

The Polo Mk6 arrives eight years after the current Polo was launched. While the looks are a clear evolution of the Mk5, there's a range of new tech under the skin, including VW's latest MQB A0 small car platform. This is shared with the new Ibiza, while future versions of the Audi A1 and Skoda Fabia will also be based on MQB.

Using this new platform means the Polo is longer, wider and has a stretched wheelbase, too. At 4,053mm, it’s 81mm longer than the Mk5, and only slightly shorter than the Golf Mk4. An extra 69mm of width will boost passenger space, as will a wheelbase that has stretched by 94mm. Boot space has also risen to 351 litres - up from 280 litres in the Mk5 - but the Mk6 will only come as a five-door, as low sales numbers mena the three-door body has been dropped.

The design of the Polo features a chunky front end that features C-shaped LED daytime running lights. These will be standard across the range, while the rear end has a more squared-off look. R-Line models get a sporty  boost, with chunky air intakes, a rear diffuser and a roof spoiler. There will be more colour options across the range, and new alloy wheel designs offer more personalisation options. VW’s head of design, Klaus Bischoff, describes the new Polo as having “an expressive design… compact, sportier, cleaner and unique within the brand’s range”.

As well as a bigger cabin, VW claims that the Polo's quality and technology has hit new levels. The layout is said to be “structured for the digital world” and the glass touchscreen infotainment system on top of the centre console is the hub for this tech. It varies in size from 6.5 to eight inches, though the eight inch unit is standard in the UK. The Polo will also be offered with VW’s Active Info Display. This was updated for the recently launched Golf Mk7.5, and features a clearer layout and redesigned steering wheel controls. 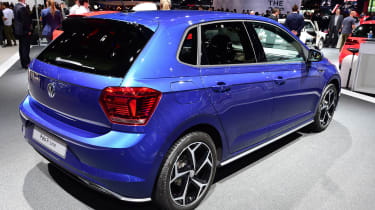 Five and six speed manual gearboxes and a seven-speed DSG automatic are available depending on engine. All Polos will come with stop-start and regenerative braking as standard, too.

Options on higher spec cars include ambient lighting, while a variety of soft-touch surfaces are designed to boost perceived quality. Higher-end models feature a different dash trim, while there are 11 upholstery options and 13 colour choices for the dash.

What do you think of the new Volkswagen Polo? Let us know in the comments section below... 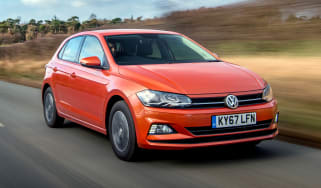