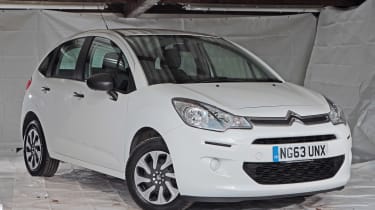 The second take on the C3 was a big improvement. The newer car looks far more stylish and is built to a higher standard, yet you don’t have to pay very much to secure something with plenty of life left. Because the C3 was never popular with fleet buyers there are lots of low-mileage examples to choose from, and thanks to keen prices when new, many are high-spec cars. The fact that the C3 has been the subject of over 30 recalls is cause for alarm, but as our Driver Power survey shows, dependability isn’t necessarily an issue for C3 owners if you buy carefully.

UK car buyers have long struggled with Citroen, as they have been switched off by products that have either been too adventurous or not adventurous enough.

The original C3 looked neat, but didn’t offer anything new. So with the C3 Mk2, Citroen had a mountain to climb – and it seemingly conquered it. When it launched we wrote: “The old C3 could never worry the supermini class leaders, but the new model does just that. It’s good to drive, has distinctive looks, a raft of neat features and a range of economical engines. It’s an excellent supermini that should be a big hit for the French firm.” Despite this, the C3 didn’t sell well – does it deserve greater recognition?

When the auto-only e-HDi 70 Airdream EGS VTR+ arrived in January 2012, it was rated at just 87g/km and 83mpg with its 1.4-litre diesel engine. A range-wide facelift in June 2013 saw PSA’s three-cylinder 1.0 and 1.2-litre PureTech petrol engines replace the previous 1.1, 1.4 and 1.6-litre four-cylinder units. The styling was also refreshed inside and out, plus there was extra standard equipment. 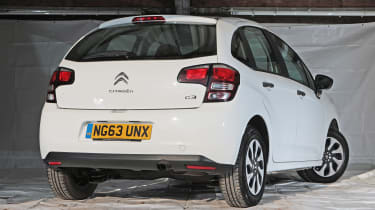 Moving up to VTR+ brought a panoramic windscreen, air-con, cruise control with speed limiter and curtain airbags. Alloy wheels and Bluetooth were also added to the standard equipment list. The range-topping Exclusive added climate control, powered rear windows, an alarm and privacy glass. There was also heating and power folding for the door mirrors, bigger (16-inch) alloys and ESP – but only on the 110bhp 1.6 HDi, disappointingly.

Alternatives to the Citroen C3 Mk2

There are some cracking contenders in the supermini sector, not least the multi-talented Ford Fiesta. Great for new or experienced drivers alike, the Fiesta is widely available, practical and great to drive, plus most examples are well equipped.

The Vauxhall Corsa is top value too, and has a spacious cabin, plus there are loads to choose from. The Renault Clio and Peugeot 208 are strong value and come with some great engines – much the same as the SEAT Ibiza and Skoda Fabia. We’d also consider the more costly Volkswagen Polo and Toyota Yaris, while the Kia Rio and Hyundai i20 offer quality, practicality and reliability.

Check all of the electrics, including the central locking and electric windows, as the control unit can stop working. 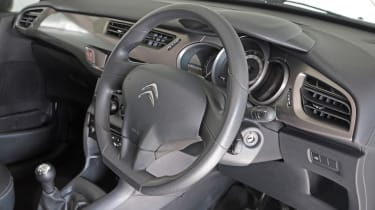 If the car looks as though it’s sitting low at one corner, it’ll be because the coil spring has snapped in the suspension.

Engine oil leaks aren’t unusual, with the most common culprit being the timing chain tensioner bolt, the sump or the driveshaft seals.

The drop links in the front suspension fail, leading to knocking noises as the car is driven over bumps. Repairs aren’t costly.

Entry-level C3s feel less well appointed than mid-range and top-spec cars, thanks to cheaper materials and less equipment. All C3s have seats which need more support, but practicality is good; the boot will swallow up to 1,121 litres with the seats folded or 300 litres with them up.

All C3s have to be serviced every 16,000 miles or 12 months. The first two services are priced at £186 and the third costs £221, but once a C3 has celebrated its third birthday it’s eligible for cut-price maintenance. From this point on, services alternate between minor and major priced at £195 and £250, although budget-conscious owners can opt for the Essentials programme which uses pattern parts to cut costs to £115 and £140 respectively.

The C3 Mk3 has been recalled a shocking 32 times, although in some cases these recalls have affected just short production runs and therefore relatively few cars. 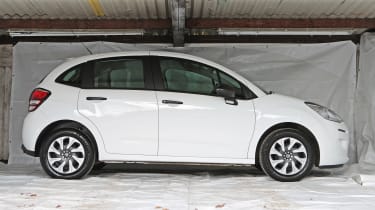 The issues that can affect some C3s include damaged brake hoses, fuel leaks, the front axle coming adrift and lights failing. Also possible are the bonnet and tailgate failing to latch, the engine cutting out, power steering glitches, the rear screen falling out, oil leaks, ESP/ABS/handbrake failure and front suspension failure.

The C3 came 113th in the 2016 Driver Power satisfaction survey, which isn’t too bad. The highest score, 68th, was for reliability while the only other top 100 scores were for running costs (77th) and practicality (84th). Lowest positions were for build quality (126th) and ease of driving (131st); ride quality was 118th.