All-new model aims to inject some style into the supermini market. We try it out on British roads. 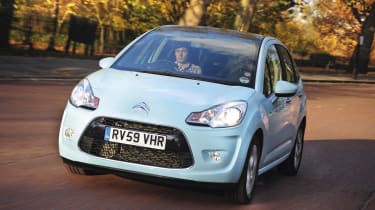 Striking looks, impressive features and decent build quality mean the C3 will be a real worry for the class leaders when it arrives in February. While it isn’t as much fun to drive as some of its rivals, the Citroen is an excellent choice for those looking for a comfortable all-rounder. Our only real concern is the steep price of this Exclusive flagship. Perhaps Citroen’s famed discounting schemes will help take out the sting for drivers on tight budgets.

Take a look at Citroen’s next-generation C3. Aimed at the mighty Ford Fiesta and Volkswagen Polo, it promises to offer drivers striking style – as well as a ‘touch of glass’ thanks to the huge ‘zenith’ panoramic windscreen.

And there is no doubt that the newcomer turns heads. The exterior replaces the outdated, bulbous look of the original C3 with a modern, grown-up feel which brings the new car in line with its big-name rivals.

While the styling still divides opinion among the Auto Express team, the C3 has a more confident stance than its predecessor, and is much more distinctive. Equally good news is that the Citroen is even more impressive inside.

Thanks to that massive windscreen, the cabin feels light and airy. The sense of space isn’t merely an illusion, either, as there’s plenty of room in both the front and back seats, plus a huge 300-litre luggage area.

A solidly built dashboard featuring plenty of soft-touch materials shows that the firm is back on track with its build quality after the disappointment of the outgoing car, which was never the strongest in this area. It looks good, too, with flashes of chrome and a flat-bottomed steering wheel that enhances a well laid-out centre console.

On the road, our 110hp 1.6-litre HDi was smooth and punchy, launching the Citroen from 0-60mph in 9.9 seconds. Throttle response was good, but even more impressive are the eco credentials, with only 118g/km of CO2 emitted and 62.7mpg fuel economy.

Just as welcome is the comfortable ride, which soaks up surface imperfections with ease. Unfortunately, the handling suffers slightly, with the C3 lacking the agility that characterises rivals such as the Fiesta and MINI.

The biggest problem is that the Citroen simply isn’t as involving to drive as its rivals. The steering is lacking in feel, and suffers from a strong tendency to self-centre if you slacken your grip on the wheel in corners.

The brakes are powerful, yet if used hard can undermine the car’s composure. On a brighter note, the quality of the gearchanges has improved – but the unit still lacks the smooth shifts on offer from rivals such as the Polo.

The Exclusive model we drove seems steep at £15,200, but it does boast a lot of kit. Added to the already expansive features list is ESP, power-fold mirrors, climate control and alloy wheels. The cabin is certainly a pleasant place to spend time, but if value for money is a priority when buying a new car, look at some of the lesser variants.

As a whole, though, the package is convincing. While the old C3 was too small and unrefined to ruffle the feathers of the class leaders, the fresh model rights those wrongs with spectacular results.

Offering luxury and comfort in equal measure, it’s nearly as quiet and composed as the Polo, and certainly an interesting alternative to more racy rivals such as the SEAT Ibiza. And although its numb steering ensures it won’t put a smile on your face in the way the Fiesta does, it is still a relaxing car to drive over long distances.

Rival: Volkswagen Polo The baby VW is a sensible, grown-up supermini. But for those who are seeking something with a little more character, the Citroen could make a more appealing choice.