It's comfortable and economical, but the Citroen C4 doesn't stand out in any particular area 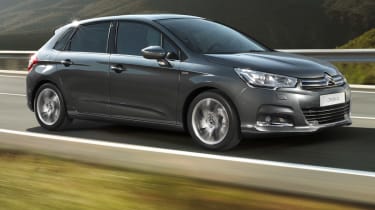 Even compared to some budget competition, the Citroen C4 is well outclassed. It feels like an old car – and a 2015 facelift didn’t do enough to bring it back into contention. It’s also not as practical as many rivals, plus it’s too expensive and will lose more money in depreciation.

It’s spacious enough though, especially in the front. It's also comfortable thanks to a particularly soft ride, although the trade-off is lacklustre handling  – most of its rivals are more fun to drive.

While the C4’s standard equipment and technology don't feel cutting-edge, all later models feature air conditioning, electric front windows and cruise control. They’re also all cheap, but they're not as efficient as many rivals - even the cheaper C4 Cactus, which in our eyes is by far the more rounded car, is a better choice.

The Citroen C4 has formed the basis for a number of other models in the Citroen range, from the C4 Cactus to the C4 Picasso and Grand C4 Picasso, but the basic hatchback is something of a disappointment in comparison. There were two generations of Citroen C4, with the first running from 2004-2010, while the C4 Mk2 here was in production from 2010-2018. The second generation delivered comfort and reasonable space for a decent price, but unfortunately the compact hatchback class is one of the toughest markets out there, and the C4 struggled in the face of a raft of talented competition.

While the original C4 came as a five-door hatchback or a sportier three-door with a different body design (which gained a cult following, courtesy of Citroen rally driver Sebastien Loeb and his multiple world rally championship wins in it), the Mk2 just came as a five-door. If you wanted something other than a hatch, your choices with Citroen were either the C4 Picasso MPV, the larger Grand C4 Picasso version, or later in the C4's life, the C4 Cactus pseudo crossover/hatch.

Citroen gave the C4 a minor facelift in 2015 to coincide with the arrival of cleaner Euro 6-compliant engines, and these are the motors we'd choose if you're looking to buy a used C4. The 1.2 PureTech three-cylinder turbo petrol comes in either 110hp or 130hp spec, while the 1.6 BlueHDi diesel has 100hp or 120hp, again depending on trim level. The C4 was available with a powerful 2.0 HDi diesel for a while, although this was dropped when it couldn't meet the later Euro 6 emissions standards.

Top-end versions of the 1.2 and 1.6 come with stop-start technology and six-speed manual transmissions - as opposed to the five-speed fitted to the less potent choices. Citroen's clunky EAT6 auto gearbox was also offered, although we think there are far better auto gearboxes to choose from on the market. All C4s are front-wheel drive. 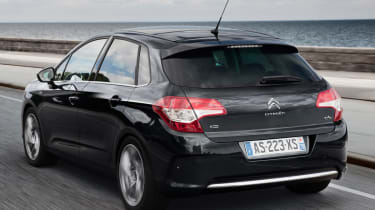 The C4 was given three trim levels to bring it into line with the rest of the Citroen range when the facelift arrived in 2015, so there are Touch, Feel and Flair models on offer. The basic Touch trim has a decent amount of kit included as standard, with LED lighting, seat height adjustment, electric mirrors, cruise control and air-con all featured.

Feel adds 16-inch alloy wheels, a Bluetooth-enabled DAB radio and MP3 CD system and an instrument panel which buyers can customise with a choice of colours. At the top of the range Flair spec adds some luxuries including cornering front fog lights, a seven-inch touchscreen, reversing sensors, dual-zone climate control and automatic wipers and lights.

Prices when new made the Citroen C4 one of the better value hatchbacks on sale, so rivalled the likes of the Skoda Rapid, Fiat Tipo and SEAT Toledo. On the used market, the Citroen C4 makes a good buy thanks to its steep depreciation which makes it more attractive than rival hatchbacks such as the VW Golf, Ford Focus, Vauxhall Astra, Peugeot 308 and Renault Megane, among many others. However, there are question marks over the C4's reliability when compared to these models. 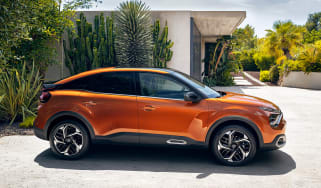 From electric cars to supercars, this is our list of the best new cars coming in 2021
New electric Citroen C4 hatch to target VW ID. 3 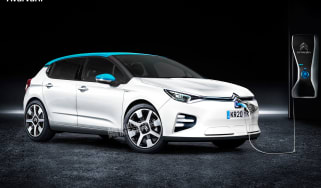 New Citroen C4 hatchback will be revealed in 2020, with electric drive to be offered alongside petrol and diesel
Citroen reveals C1, C3, C3 Aircross and C4 Cactus 'Origins' special editions 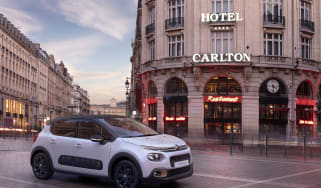 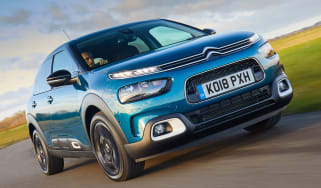 The C4 Cactus is still a stand-out design that's comfortable and efficient, but a recent facelift repositioned it as a budget hatchback
Used Citroen C4 Cactus review 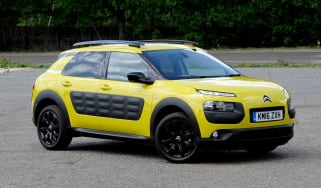 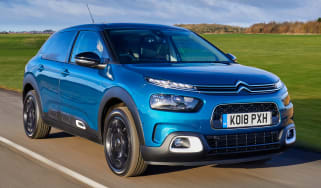 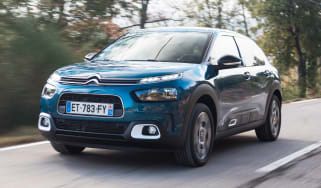 The Citroen C4 Cactus SUV has had a mid-life facelift, with suspension updates and more conventional styling
Citroen C4 hatchback set to return 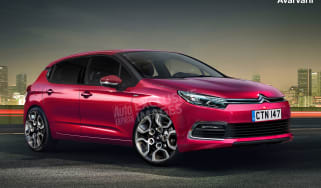 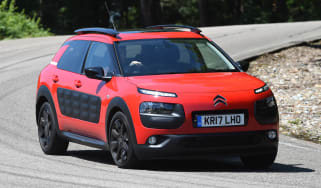 Here's proof that you don't have to be sensible when it comes to fuel efficiency
2018 Citroen C4 Cactus facelift: UK prices revealed 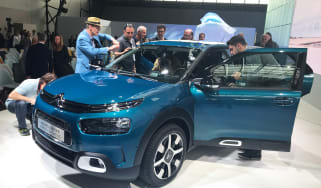 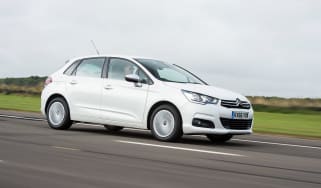 Citroen's C-segment hatchback will go out of production in the coming months, bosses have revealed
Renault Captur vs Citroen C4 Cactus 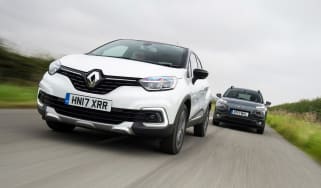 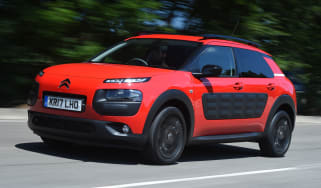 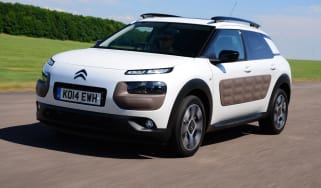 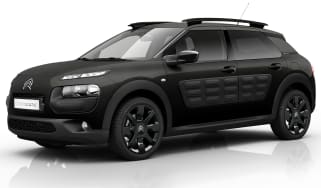 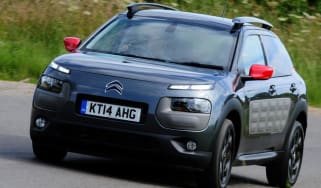 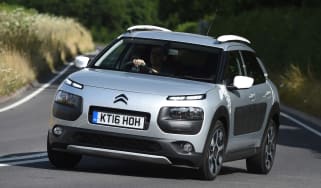 We don our surfing shades and board shorts and see if the special edition Citroen C4 Cactus Rip Curl is any good
Crossover of the Year 2016: SEAT Ateca 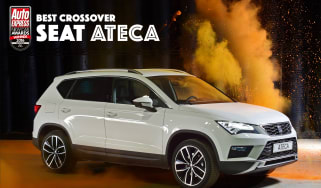 The SEAT Ateca is the 2016 Auto Express Crossover of the Year, with the Citroen C4 Cactus and Renault Kadjar commended
Citroen Advanced Comfort Lab concept review 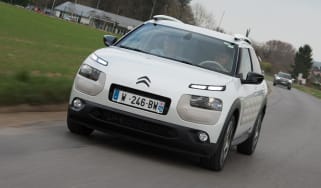 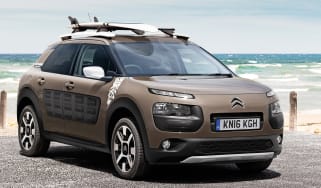 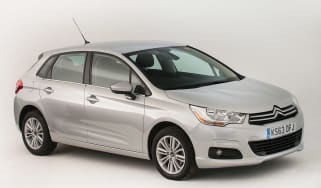 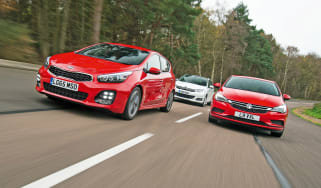 Kia’s updated Cee’d is late to the three-cylinder engine party, but has it caught up with Vauxhall’s new Astra and Citroen’s C4?
Skip to HeaderSkip to Content