Can stylish new supermini give VW's Polo and Ford's Fiesta a run for their money? 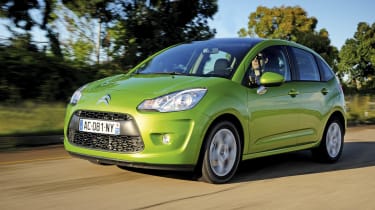 What a difference! The old C3 could never worry the supermini class leaders – but the new model does just that. It’s nearly as quiet and composed as VW’s Polo, and while it won’t put a smile on your face in the way that Ford’s Fiesta does, it’s still very good to drive. Factor in distinctive looks, a raft of neat features, such as the excellent panoramic windscreen, and a wide range of economical engines, and you’ve got an excellent supermini that should be a big hit for the French firm. Impressive as this flagship model is, though, it’s a bit expensive. We’d advise buyers to look further down the range.

Take a look at one of the most important new Citroens ever! While the French company has the MPV market cornered with its Picasso-badged people carriers, it’s never offered a supermini which can really challenge the Ford Fiesta and Volkswagen Polo – but that’s about to change.

With buyers keen to keep a tight rein on running costs, small cars are big business these days. And the smart new C3 could potentially be Citroen’s best-selling model. But there’s another reason to look forward to its arrival – it also previews the upcoming MINI-rivalling DS3, which is Citroen’s latest attempt at tackling the prestige brands head-on. So how does the C3 stand up?

Very well! There’s a glimpse of the old car’s curves in the new design, but gone is the awkward quirkiness, replaced by a classier, more upmarket shape. Flourishes include neat slashes in the bonnet, a bold grille, intricate headlights and tail-lamps and a chunky stance. It’s distinctive enough to appeal to Citroen fans, but not so ‘out there’ that it puts off everyone else.

Inside, the C3 has taken a big leap forward. It’s gimmick-free and very well built, with a stylish dash that features a central silver plastic strip and soft-touch facia. Other neat touches include the thick-rimmed, flat-bottomed steering wheel and a classy row of ventilation controls on the centre console.

It would be nice to sit a bit lower, but with reach and rake adjustment, the driving position is good, and there’s plenty of room up front. There’s lots of light as well, thanks to a panoramic glass windscreen, known as Zenith. This is standard on all VT, VTR+ and Exclusive-trimmed models, but not the base Airdream+ cars. Pioneered on the C4 Picasso, it makes the cabin feel very airy and gives the driver and passenger a unique perspective.

Classy Space in the back is ample for two adults, and the boot is big, at 300 litres. Although equipment lists have yet to be finalised, expect air-con, alloys and a speed limiter to be included on the VTR+, with the top-spec Exclusive getting climate control and other goodies. However, ESP doesn’t come as standard on lower-spec models – and that’s why Euro NCAP has denied the French manufacturer a full five-star crash test rating. So it’s four stars for now.

Three-cylinder petrol turbo units will be available by 2012, but in the meantime 60bhp, 75bhp and 95bhp petrol engines will be available, alongside the flagship 120bhp 1.6-litre driven here. This revs smoothly and has decent punch, propelling the car from 0-62mph in a peppy 8.9 seconds, and returns 47.9mpg. It’s quiet at motorway cruising speeds, too. The five-speed manual gearbox is a weak point, though – it’s loose and imprecise, and could do with a sixth ratio to make high-speed work more relaxed.

Citroen engineers have done a good job with the dynamics. Where the old model suffered from overly light steering and grabby brakes, the new C3 is a class act throughout. Its controls are consistently weighted, but it’s got a big car feel with a soothing ride and real refinement. And although there isn’t the sharpness or agility you’d find in a Fiesta or MINI, it’s one of the finest-driving Citroens for a long time. Add that to the rest of the package, and you’ve got a supermini that can hold its own among the best.

Rival: VW Polo Essentially a mini Golf, the Polo is the most grown-up small car you can buy. It’s more sober than the C3 and build quality is better, but the Citroen has really closed the gap in every other area.