Our verdict on the new three-cylinder Citroen C3, which promises to return more than 60mpg 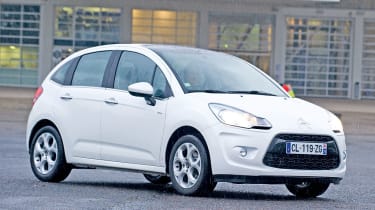 The new three-cylinder needs to be worked hard, but that’s hardly a chore when it’s so fun to rev and sounds so sweet. And there’s the same supple suspension and surprising refinement we expect from the C3. It’s still doesn’t match certain rivals, but this new engine does add to the appeal.

Citroen is following the trend set by Ford’s 1.0-litre EcoBoost and Renault’s 0.9 TCe engines with two new three-cylinders of its own. The Peugeot 208 already has them, but we travelled to Citroen’s Paris HQ to test the new units in the first of its cars to receive them – the C3.

The two non-turbos are loaded with technology such as direct fuel injection, plus an aluminium block and cylinder head. All are designed to reduce weight (by around 25kg) and running costs. So how efficient is the 1.2?

Citroen’s engineers claim that a stop-start system would squeeze the 1.2-litre model under the 100g/km barrier, too, but the newcomer does without this tech – for now, at least.

The 1.2 is offered only on the VTR+ with a five-speed manual transmission. Start it up, and there’s a thrum that’s now becoming familiar thanks to the growing number of three-cylinder engines on the market.

Flex your right foot and the motor revs quickly with a throaty exhaust note and a gentle roar under full throttle.

One area that’s improved significantly is in-gear acceleration. For such a small engine it responds enthusiastically, despite its modest 118Nm of torque.

In reality, it feels no quicker than the four-cylinder it replaces, but the way it revs cleanly – and sounds great while it’s doing so – means you’ll have much more fun. Refinement has always been a C3 plus point, and the engine seemed near-silent while cruising at 70mph.

Around town, a few further changes to the C3 come into focus: the suspension is slightly firmer in order to sharpen up the handling, but even so the Citroen still can’t match rivals such as the Ford Fiesta and Volkswagen Polo through corners, where it rolls around on its axles. The ride is good, though, so despite its small engine this C3 makes good sense on long trips.