Toyota has launched a hopped-up version of the Daihatsu Copen kei car, featuring a range of cosmetic revisions and chassis upgrades 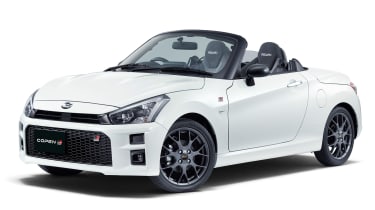 This is the new Daihatsu Copen GR Sport. It’s an upgraded version of the standard Copen roadster, which is sold as a kei car in Japan, and it has been tuned by Toyota’s performance subsidiary, Gazoo Racing - Daihatsu is part of the Toyota group of companies. Like the standard Copen, the GR Sport will only be sold in Japan, where it will carry a price tag of around ¥2.4million (roughly £17,500). Revisions are limited to styling tweaks and suspension upgrades.

• Foreign cars: the best vehicles we can’t buy in the UK

Inside, buyers get a new leather-trimmed Momo sports steering wheel, a fresh GR-branded instrument binnacle, piano black trim for the dashboard and a pair of unique Recaro sports seats, embroidered with the Toyota Gazoo Racing emblem.

Chassis upgrades for the Daihatsu Copen GR Sport include stiffer springs and dampers, a reconfigured electric power steering system and a limited-slip differential for the manual- equipped models. There’s also a host of additional chassis braces fitted to the front axle and floor, which Toyota says improves the Copen’s handling. 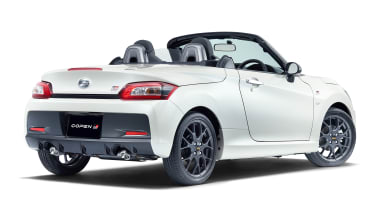 To ensure the Copen GR Sport meets Japan’s rigorous kei car regulations (which dictate its physical dimensions and performance), it’s powered by the same turbocharged 660cc three- cylinder petrol engine as the standard car. The engine produces 63bhp and 92Nm of torque, which is fed to the front wheels via either a five-speed manual gearbox or a CVT auto.

What do you make of the Daihatsu Copen GR Sport? Let us know in the comments section below…