Blue oval's all-new baby has finally broken cover - and Auto Express has all the pictures and full details. 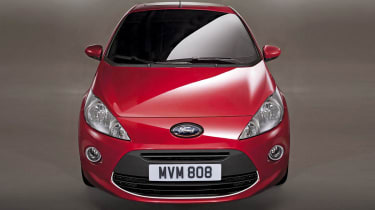 The waiting is over! Ford’s thrilling new Ka has broken cover – and here it is in all its glory.

The newcomer will replace the original 12-year-old Ka, and shares its underpinnings and engines with the Fiat 500. What’s more, it’s being built alongside the hugely successful Italian model at Fiat’s plant in Tychy, Poland.

But the Ka – which is due to hit showrooms towards the end of 2008 – is much more than a simple re-skin of the 500. Privately, Ford says that its engineers are working hard to ensure that the new Ka can match the current model’s composure and pin-sharp handling, while offering greater refinement.

Initially, there will be a choice of 63bhp 1.2-litre and 100bhp 1.4-litre petrol engines, as well as a 1.3-litre Multijet diesel. The latter will be good for 75bhp and 145Nm of torque, while returning more than 50mpg.

There’s no official word yet, but Ford is also understood to be planning a hot ST performance flagship to replace the Sportka. This will be powered by the same 1.4-litre turbocharged petrol engine as the Fiat 500 Abarth. A chunky bodykit, flared wheelarches and fat 17-inch rims will separate the flagship from lesser models.

The Ka ST is likely to deliver at least 150bhp, will cover the 0-60mph sprint in less than eight seconds and have a top speed of 125mph – ensuring it joins the Abarth as one of the fastest cars in the class.

A series of ‘aftermarket’ extras offered via Ford dealers are likely to boost the model’s appeal even further. The kit will be developed by specialist firm Mountune, which recently produced a tuning pack for the Fiesta ST, and would include suspension and engine upgrades.

The new Ka will make its world debut at the Paris Motor Show in September, and is sure to appeal to Ford fans with its attractive styling. Short overhangs, a steeply raked windscreen and arching roofline mean the Ka looks sporty, while being spacious enough for four.

The interior has taken huge strides forward, too, combining improved ergonomics with better quality materials in a bid to create a more refined driving experience. The gearlever has moved higher into the dashboard, and the radio and climate controls are mounted so they are within easy reach of the driver. The steering wheel now features a multifunction control column, too, while a display between the dials provides trip information.

As with the Fiat 500, Ford is promising that the Ka will be among the most luxurious small cars on the market, while there will be a generous optional equipment list.

Ford isn’t planning a direct replacement for the Streetka roadster, although sources indicate that a 2+2 convertible is being developed in conjunction with Fiat. A mild hybrid is also in the pipeline. This promises to mate diesel-beating economy with petrol refinement and low emissions.

And the Ka’s diminutive shape means a tax-busting electric hybrid could be on the cards, too. This model will have CO2 emissions that fall below the 100g/km tax threshold.