The wait is over! Fiat's funky 500 has finally landed on UK soil, and Auto Express is first behind the wheel. 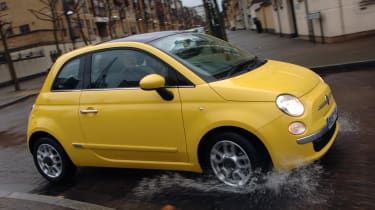 The 500 signifies a new era for Fiat. It’s a cracking small car that distils all the appeal of the original into a brilliant modern-day package. For many people its retro styling will be the sole reason for a purchase, but the fact that it’s well priced, costs pennies to run and promises excellent residual values means it can be bought with the head as well as the heart. The driving experience isn’t quite as good as the visual one, but the 500 is a breath of fresh air and is sure to be a huge hit.

The 500 has landed! The most eagerly anticipated car of 2008 has arrived in the UK – and Auto Express has jumped straight behind the wheel to give you the definitive verdict.

With its retro looks, it’s without doubt the most important model that Fiat has ever launched, and uses the strengths of the original 1950’s 500 to introduce a new generation of customers to the Italian brand. Early indications suggest the car is set to be a huge success, and this year Fiat UK expects 18,000 orders.

But if you’re a potential buyer, there’s probably one reason above all others that the 500 is on your list – and that’s its design. Inspired by its predecessor, the updated model oozes charm from every angle. It’s no surprise that it’s fast becoming one of the new millennium’s must-have items.

But with tough rivals in the shape of the MINI, not to mention forthcoming all-new city cars such as Ford’s Ka – which will be revealed later this year – has the 500s got the substance to match it’s style?

The answer is not quite as straight forwad as you might expect. Smaller and even cuter than the MINI, but with a chunky wheel-at-each-corner stance, the 500 matches its cheeky curves to beautiful detailing with chrome door handles that feel great to touch and big, bold Fiat badges at the front and rear.

Inside, it’s just as much of a feast for the eye. There’s a cool circular speedometer and rev counter, which both feature sporty red needles, while the classy dashboard trim is contrasted by a bright splash of body-coloured metal that stretches across the facia.

With a chunky gearknob and large simple buttons for the radio and ventilation systems, the 500 has a good looking but functional cabin. Space in the front is good but those in the rear will be cramped for legroom and thanks to that sloping tailgate, headroom too. Fit and finish is good though – and a major step forward over the brand's previous efforts. However, the 500 just isn’t up to the same standard as a MINI.

With a five-star Euro NCAP crash test rating and seven airbags as standard, the 500 is one safe little car, though. And it’s very well equipped too.

Three trim levels are offered – Pop, Sport and Lounge – with even the base Pop model getting a trip computer and an MP3-compatible stereo. Our Lounge-trimmed test car comes fully loaded with air conditioning, 15-inch alloys and a glass roof, plus Fiat’s Microsoft-developed Blue & Me system, which consists of Bluetooth phone compatibility and a USB port for iPods and other music players.

There are also a host of exterior sticker packages available, including chequered roofs and stripes. Combined with an extensive list of extras such as alloy wheels, interior trim options and bodykits, there are almost 550,000 possible permutations of 500.

Power comes from a choice of three engines, including a 1.2 and 1.4-litre petrols and the 1.3-litre Multijet diesel tested here. With only a tiny degree of coarseness under acceleration, it’s a remarkably smooth, refined and torquey unit. Economy is amazing at 67.3mpg combined while CO2 emissions are super low at 111g/km.

However, the engine’s responsiveness could be better, though, and the same criticism can be levelled at the electric power steering, which lacks feel and immediacy. As for the ride, the soft suspension set-up means the 500 is generally comfortable but can start to bounce on broken, undulating surfaces. Apart from that, the 500 is a lot of fun – it’s agile and despite some body roll, generates impressive grip.

Rival: MINI One Priced at £11,610, the entry-level MINI costs £910 more than the top-of-the range Fiat 500. It’s the better car to drive with a genuinely sporting experience and is a little bigger inside too – but it does look expensive alongside the well-equipped Fiat, which offers even more style for a lot less cash.