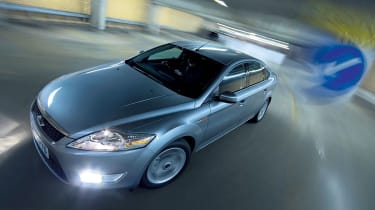 The mighty Mondeo is back – and has gone straight to the top of the class. After years in the shadow of the ultra-refined Volkswagen Passat, Ford’s family favourite has been completely reinvented with a new look, bigger cabin and an even more polished driving experience.

Having been criticised for the bland styling of its predecessor, Ford has clearly worked hard on the new Mondeo. Striking without being controversial, the big Ford is packed with clever details that emphasise its solidity. The cabin carries on the good work, with plenty of metallic finishes and some of the best trim quality around. Ford claims to have benchmarked the newcomer against the likes of the Audi A4 and BMW 3-Series in an effort to generate a premium feel, and the approach has worked. Everything from the dashboard material to the noise of the indicators has been honed to create a refined, soothing driving experience.

Then there’s the sheer amount of room on board. Because it retains its trademark hatchback rear end, the Mondeo is considerably more flexible than the booted Passat. And every passenger gets increased space, plus seats that offer greater comfort than before. Refinement on the move is another strong point. No rival cruises as comfortably at high speeds, or deals with coarse surfaces so well. It even delivers a cosseting ride around town. And thanks to a body that’s now 130 per cent stiffer, it handles beautifully, too. Factor in the incredible 75-car range, and you can see why the big Ford is a worthy winner of this year’s Family Car crown.