Honda’s new mk10 Accord family car has been revealed in the US but there are no plans to sell it here. 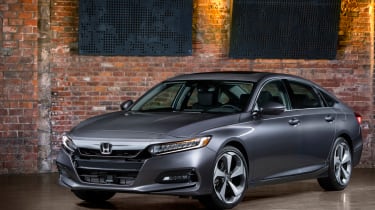 Honda has lifted the sheets from a new tenth-generation version Accord – but we won’t be getting it here in the UK.

Honda axed the Ford Mondeo rival from the British market in 2015, citing declining market trends as the reason for its withdrawal. European buyers are turning away from traditional saloon models more than ever, while the crossover SUV market has been flourishing in its place.

As such, this new Accord is destined for American shores, complete with the option of a hybrid powertrain plus new four-cylinder turbocharged petrol engines. 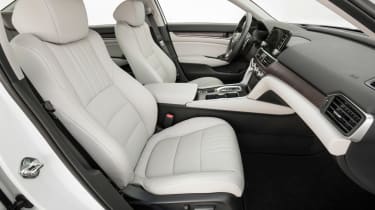 Honda’s latest design language is interpreted into the Accord’s silhouette. Viewed head on, a new face boasting a design in tune with the latest generation Civic headlines what Honda says is a sportier, more rakish design. It boasts a slightly longer wheelbase than the ninth-generation car but is shorter overall, while sitting lower and wider to give a more purposeful stance.

In the cabin, Honda promises a more premium interior design, feel and finish, while new tech appears as well. An 8-inch touchscreen infotainment system is joined by a new 7-inch TFT screen for the driver, and Apple CarPlay plus Android Auto appear. A suite of driver assists including adaptive cruise control, autonomous emergency braking and traffic sign recognition is also available.

Alongside the redesign, Honda says that the new Accord is 50kg to 80kg lighter than the previous model, depending on trim. This is down to new lighter body structure utilising additional ultra-high-strength steel, and a new lighter chassis with an all-aluminium front subframe.

Under the bonnet, US buyers get a total of three powertrain options. The entry-level car will be powered by a new 1.5-litre turbocharged four-cylinder engine producing 189bhp and 260Nm of torque, but a more powerful 2.0-litre option is available. It serves up 248bhp, and Honda says it is derived from the 316bhp powertrain found in the latest Civic Type R. A CVT gearbox and a ten-speed automatic are available, but Honda offers a six-speed manual too. 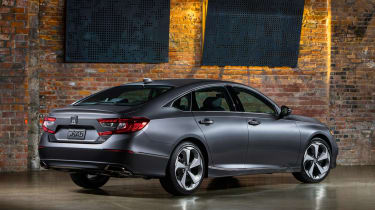 Finally, a new hybrid model will eventually enter production in the United States, making use of a 2.0-litre petrol engine mated to Honda’s two-motor hybrid system. The firm promises it’ll be more efficient, and won’t impede on the car’s interior space and practicality.

Would you like to see the Honda Accord return to the UK market? Have your say in the comments...