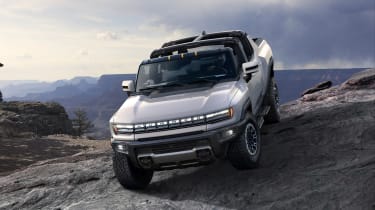 This is the new GMC Hummer EV, and unlike Hummers of old with their large and thirsty petrol and diesel engines this new model has gone green with a pure-electric powertrain. It is designed to take on the likes of the Bollinger B1, B2 and off-road EVs from fellow American brand Rivian, and GMC promises it will be “the most capable factory truck ever.”

The reborn Hummer is powered by three electric motors – one for each rear wheel and one shared across the front axle – which produce a combined output of 1,000bhp and 15,592Nm of torque. GMC also says the system will provide a 0–60mph time of three seconds.

The electric drivetrain is powered by GMC’s new “Ultium” battery pack, which the brand says will provide over 350 miles of range on a single charge. The Hummer EV also supports industry leading 350kW DC fast-charging, which means it’s capable of adding around 100 miles of range in just 10 minutes, if you find a plug quick enough.

To make the Hummer EV unstoppable off-road, GMC has invested heavily in not just the truck’s powertrain, but its chassis too. It starts with a set of 18-inch alloy wheels wrapped in knobbly 35-inch off-road tyres, to give the Hummer ample ground clearance. On top of this, it features an adaptive air suspension system that can raise the car’s ride-height a further six inches when required.

GMC has also fitted a four-wheel steering system, which the company says should provide better manoeuvrability over tough terrain. The firm has even added a setting called “CrabWalk,” which allows the front and rear wheels to steer in the same direction at low speeds to move the off-roader diagonally over obstacles. 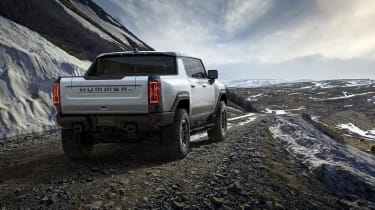 To stop the underfloor battery packs from being damaged off-road, there’s a series of tough steel bash plates mounted along the chassis. Alongside this, there’s also a pair of underbody cameras, which feed into the car’s 13.4-inch infotainment system and can be used to spot sharp obstacles underneath the vehicle, similar to Land Rover’s ClearSight system.

Delve into the Hummer EV’s infotainment and you’ll find a range of off-road information widgets, such as a pitch and roll indicator, a tire pressure monitoring system and a torque output gauge. All of this equipment – both mechanical and electrical – gives the electric SUV a maximum fording depth of 24 inches and the ability to climb verticals of 18 inches.

The styling inside and out is a modern twist on the original H1’s boxy profile and enormous footprint. There’s a huge pick-up bay at the rear and further storage under the bonnet, while the interior carries over H1 cues too with a huge centre console spacing out the driver and front passenger, home to the infotainment system. In front of the driver is a 12.3-inch digital instrument panel.

As is usually the case nowadays, the first Hummer EVs off the production line will come in a highly specced launch edition trim-level. It’s called the “Edition 1” and it has a starting price of $112,595 (or £86,240) – for which buyers get removable targa-top roof panels, a semi- autonomous driver assistance system, an electrically operated tonneau cover, a retractable rear window, and all of the aforementioned off-road equipment.

Inside, the cabin upholstery is also unique to the launch edition variant and features black and white leather upholstery, bronze trim pieces for the steering wheel, seat backs and centre console and an “Edition 1” badge mounted on the dashboard.

GMC has also issued a few preliminary details about the rest of the Hummer EV’s line-up. The cheapest variant will be priced at $79,995 (around £61,000), although it’ll ditch the flagship model’s three-motor powertrain for a two-motor setup.

Above that there’s the $89,995 (roughly £69,000) Hummer EV2X, which adds adaptive air suspension and four-wheel-steering. Finally, at the top of the standard model line-up, there’s the $99,995 (around £76,000) Hummer EV 3x, which adds GMC’s more powerful three-motor electric drivetrain and torque vectoring system.

Unsurprisingly though, the Hummer EV won’t be coming to the UK. Production for the American market is set to commence in late 2021 at General Motors’ near 40-year-old Detroit- Hamtramck assembly centre, following a $2.2 billion (£1.6 billion) investment to convert it into a electric vehicle production facility.

Would you like to see the new GMC Hummer EV hit UK roads? Let us know in the comments section below…