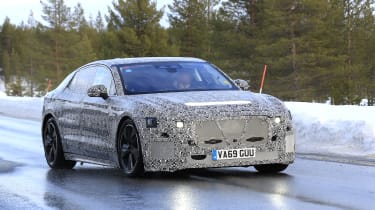 Jaguar’s forthcoming replacement for the XJ luxury saloon is nearing its launch date. The all-new model will make its official debut at the end of 2020, where it will act as a pure electric alternative to the BMW 7 Series and Mercedes S-Class saloon – although the latter will soon gain its own electric sibling in the form of the upcoming EQS saloon.

Speaking exclusively to Auto Express Jaguar design director, Julian Thomson has revealed the focus behind the new luxury car as development reaches its latter stages. “It’s going to be a very, very luxurious, very, very calm, tranquil piece of transportation,” he says. “But it's not overtly flashy, it's not overtly expensive.

“It’s a car, which you make an emotional connection with. We don't want all our people who get our cars to just sit in the back of them and just be driven around in them. They can be used like that, but at the end of the day, we know that these cars are there to be experienced and driven and enjoyed; enjoyable to sit in, relaxing to sit in, and beautiful to look at.”

Our exclusive image shows how the new Jaguar XJ could look. Its styling will be an evolution of the outgoing car’s, retaining the same long, wide stance and narrow headlamps units, as well as the company’s trademark radiator grille and shark fin antenna.

Jaguar’s most recent teaser image suggested that the new XJ would also receive a sharper XF-inspired rump, with a full-width light-bar. While the rear of the test mule is masked under heavy camouflage, a subtle crease running across the width of the bootlid suggests this feature will appear on the production model. 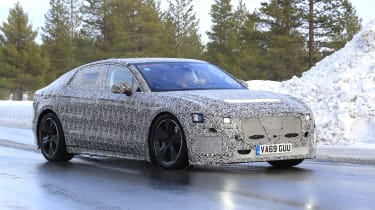 The new XJ is also set to be a very different car to Jaguar’s first electric model, the I-Pace. Thomson suggested that the XJ would have a traditional saloon look with the classic long bonnet. “If a cab-forward looking car doesn't suit a certain type of vehicle, I don't think you should do it,” he said.

“We're there to make the best looking cars we possibly can, so the new XJ, it does have a bonnet on it, and it's a very, very elegant shape.” Thompson concluded, saying: “It's probably a little bit more traditional than the I-Pace” – and this final statement certainly seems to be supported by our latest spy shots of the car.

The new XJ will be made in the UK at JLR's Castle Bromwich production site, safeguarding thousands of jobs over the next few years. It’ll also be the second all-electric model offered by the British brand, following in the footsteps of the award-winning Jaguar I-Pace SUV.

Basing production of the all-electric XJ at Castle Bromwich makes logistical sense to Jaguar Land Rover, as it offers easy access to the firm’s electric motor manufacturing centre in Wolverhampton. The experience of the plant’s current employees (who specialise in working with the XJ’s all-aluminium construction) will also prove invaluable.

However, unlike the I-Pace, which was built on a modified version of the F-Pace’s platform, the new XJ will be based on Jaguar’s all-new MLA underpinnings, which will allow battery electric, plug-in hybrid and mild-hybrid drivetrains to be mounted on the same production line. So far, Jaguar has only discussed the next-generation XJ in an all-electric context, but it's technically possible to produce combustion assisted versions of the car, too.

The British manufacturer has pledged to offer electrified options for all its new models from 2020. The new XJ will be the first electric car produced at the brand’s re-tooled Castle Bromwich plant, being designed and developed by the same team responsible for Jaguar’s all-electric premium SUV, the I-Pace. 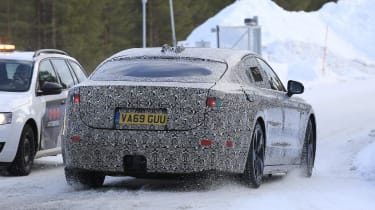 Jaguar aims to implement “giga-scale” battery production to support the project, with a new UK-based plant in Hams Hall, North Warwickshire. The facility will be fully operational later this year – and aims to produce enough batteries to supply 150,000 electric Jaguar Land Rover models each year.

Jaguar Land Rover’s CEO, Sir Ralf Speth, explained: “If battery production goes out of the UK then automotive production will go out of the UK. The battery is 40 percent of the cost of an electric vehicle – we want to keep this kind of added value inside the UK.”

Britain’s biggest car maker has suffered a series of setbacks in recent years – and has been forced to axe jobs and investment opportunities to boost profits amid dwindling sales. The company’s declining sales figures are due, at least in part, to JLR’s reliance on diesel, which has fallen out of favour with consumers.

Despite this, to try and keep ahead of the curve, JLR has thrown a considerable amount of money at its Castle Bromwich production facility. The investment will allow the company to fit its plant with the necessary tooling for the new pure-electric XJ and the company’s planned range of electric vehicles.

When asked about the size of JLR’s investment in Castle Bromwich, Speth was evasive. However, he added: “If you introduce new architectures it’s not millions but billions – it is spread over a number of years.”

What are your thoughts on Jaguar Land Rover’s electrification strategy? Let us know in the comments section below…