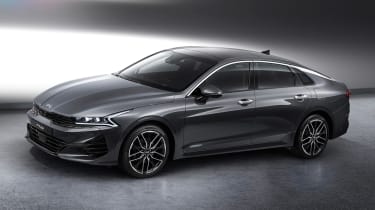 Kia has revealed the the new K5 saloon. Outside of Korea, the K5 is known as the Optima, but unlike its predecessors, the new Ford Mondeo rival will not be sold in the UK, Auto Express can reveal.

The images show that the K5 takes on a much more dramatic, coupe-like profile. Frameless side windows sit beneath a rakish roofline that slopes gently towards the end of the bootlid, itself featuring a subtle ducktail spoiler. It sits just above a full-width LED light bar, which is split into a series of morse code-style dashes.

The LED lighting at the front looks just as distinctive, with the lighting signature flowing in a sharp Z-shape from the edge of the front wing and the top of the bumper. Kia’s ‘tiger nose’ signature grille remains, and the bonnet follows the contours of its upper edge. 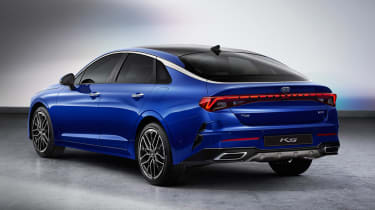 Overall, the K5 has grown over its predecessor. At 4,905mm, it’s 50mm longer than the old car, and it’s also 25mm wider. However, that sporty profile is achieved by a 20mm drop in height. Wheel sizes range from 16 to 19 inches, depending on spec.

Inside, the sketches suggest a high centre tunnel which wraps around the driver. A pair of widescreen digital displays sit across the top of the dash: one for the instrument panel, and another for the infotainment functions.

Sales in the D segment family car class have dwindled in the face of similarly-sized SUVs; in 2018 Kia sold just 423 Optima saloons (but a much more healthy 2,498 Wagons) in the UK, with year-to-date sales in 2019 on course to drop further. The K5 is due to go on sale in its domestic Korean market in December.

Are you sad to see the Kia Optima axed from the UK? Let us know your thoughts in the comments below... 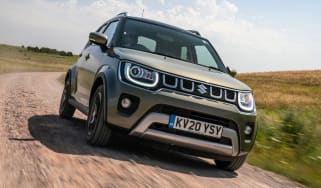