The rugged Land Rover Defender is available in at least 12 body styles and offers legendary off-road capability, but has limited load space 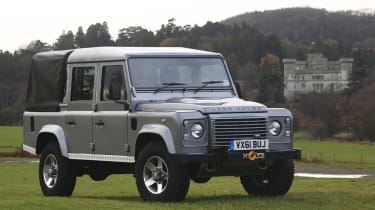 The Land Rover Defender has been in production since 1948 with a number of modifications along the way. The current range consists of some passenger-carrying station wagon models as well as pick-up, soft-top, hard-top, chassis-cab and double-cab models. Three wheelbase lengths are available – 2,360mm for 90 models, 2,794mm for 110 models and 3,225mm for 130 models.

The days of petrol and diesel engine options are over now and all Land Rover Defenders are powered by a 122bhp 2.2-litre four-cylinder diesel engine, derived from the Ford Transit engine. All four wheels are permanently driven through a six-speed manual gearbox and a two-speed transfer box, giving low and high ratios for off and on-road work. The Defender will pull a 3,500kg braked trailer, more than some 4x4 pick-up rivals.

Production of the commercial Defender ended at the same time as the passenger carrying 4x4 at the start of 2016.

If you're looking for low fuel consumption, the brick-like shape of the Defender is not going to impress. Combined fuel economy is in the 25.5mpg to 28.3mpg range, with corresponding CO2 emissions of 266 to 295g/km. Extensive off-road work will reduce that figure considerably, as will towing near the Defender’s maximum towing weight.

Load space varies according to model, with the 90 models offering the smallest load space and the 130 models the biggest. 90 models are available with pick-up, hard-top, station-wagon and utility-wagon bodywork. Pick-ups can also be specified with a canvas-tilt soft top. 110 models gain chassis-cab and chassis double-cab options, as well as a high-capacity pick-up and double-cab pick-up. The longest 130 models have a simpler range of chassis-cab, chassis double-cab and double-cab pick-ups.

One advantage that the Defender has over pick-up rivals is the availability of enclosed bodywork for the utility-wagon models, providing a lockable load space. The Defender’s age shows in the width of the vehicle, the narrowest among its rivals with a corresponding narrow load area, which is 800mm wide at best, compared with 1,515mm for the Toyota Hilux. The Defender’s width may be a help off-road, but it limits the vehicle’s carrying capacity. Chassis-cab variants offer greater width, but there is still a limit to how wide a body can be fitted to such a narrow vehicle. It’s a similar story for the length of the load bed. The longest load bed is on the 110 high-capacity pick-up, measuring 2,010mm long, compared with the Hilux single cab’s 2,340mm.

The Defender does better when it comes to payload, offering between 657kg and 1,655kg. The highest figure is for the 110 chassis-cab model, but even the 110 pick up can carry a 1,525kg gross payload, more than any pick-up rival, thanks to the Land Rover’s aluminium bodywork and older design. Defenders are popular towing vehicles, hardly surprising given the 3,500kg maximum braked trailer weight. That's notably more than some Nissan Navara versions, which offer a maximum of 2,600kg. The Ford Ranger comes close with a 3,350kg towing limit for some versions. Defenders can take up to 150kg in weight on the roof, too.

Land Rovers haven’t enjoyed the best reputation for reliability, although any vehicle that is used off-road is unlikely to be as reliable as an ordinary road-going vehicle. That said, the Defender is the least sophisticated of all Land Rover products and there are plenty on the road that are over 30 years old.

The Ford Transit-based diesel engine is a reliable unit and should not be a source of much trouble. Defenders have few safety features, perhaps not surprising given that the basic design dates back to the late 1940s. There isn’t even a driver’s airbag, so forget about passenger and side airbags or side impact beams. Even ABS is only an option on most models.

The Transit-derived diesel engine and six-speed gearbox possibly give the Defender the best performance it has ever had. There's plenty of pulling power from the engine, although it would have enough to do with a 3,500kg trailer in tow. But the Defender has a low-ratio gearbox to call on if necessary.

Driving a Defender is an acquired taste. Like many pick-up trucks, the Defender 110 and 130 have the turning circle of a supertanker, which can make manoeuvring in tight spaces interesting. The engine and gearbox mean that it's possible to cruise at motorway speeds in the Defender, but the long-travel suspension and roll angles don’t encourage spirited driving.

The Defender is most at home off-road where it’s lack of on-road poise is transformed. It lacks the driver assistance of many 4x4 pickup rivals, so still requires driver skill off-road. Its abilities exceed those of many rivals.

The Defender interior got a makeover at the time it gained the Transit-based engine and gained the most modern dashboard it has ever had. You can even get air-conditioning now. It's laid out like most modern light-vehicle dashboards with a centre section housing heating/ventilation and audio controls, and there are eyeball vents, too. It even looks quite modern.

The driver’s left leg has to share foot well space with the handbrake lever, either irritating or adding to its charm, depending on your point of view. The steering wheel doesn't have adjustment, but the driving position is reasonably comfortable, even though there isn’t much room for your right elbow.