The revised Freelander gets more equipment and more luxury 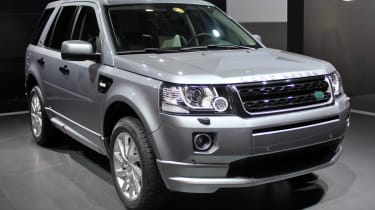 After five years on sale, the Land Rover Freelander has received its second mid-life makeover. Revealed at the Moscow Motor Show today, the refreshed 4x4 gets exterior tweaks, an all-new interior and a longer equipment list.

Back in 2010 some subtle cosmetic upgrades were applied to the grille and tailgate, to coincide with the introduction of the fuel-sipping eD4 two-wheel-drive model, but this time around the changes run deeper.

Both the headlights and taillights are now fitted with the latest Xenon LED tech, giving the front lamps a new signature graphic. The grille and fog lights are also finished in brighter chrome trim, while three new colours – Aintree Green, Havana and Mauritius Blue – are available.

On the inside there’s an all-new centre console, which swaps the mess of buttons on the current car for a less-cluttered look. The Terrain Response dial and the manual handbrake have been ditched too, in favour of buttons behind the gearlever and an electronic parking brake. A 5-inch screen has also been squeezed into the middle of the instrument cluster.

New technology includes a rear-view camera, keyless start and a ‘Say What You See’ voice activation system with visual prompts for what to say next. A premium Meridian sound system, first fitted to the Range Rover Evoque, is also offered in two states of ‘tune’; a 380W 11-speaker system or the top-spec 825W 17-speaker set-up, which also adds a larger seven-inch central display. Base-spec models use an 80W 8-speaker system.

With the addition of two new trim levels, there’s now a six-tier model range to choose from. The ‘S’, which comes with cloth seats, kicks things off, followed by the ‘GS’, which comes with full leather. Go for the ‘XS’ and the 380W Meridian sound system is fitted as standard, while new Dynamic models come with a body kit, three interior colour choices and new 19-inch 10-spoke alloys.

The engine line-up is untouched since the three 2.2-litre four-cylinder turbodiesel engines were updated in 2011. So there’s the 148bhp TD4, 187bhp SD4 and the two-wheel drive manual-only 148bhp eD4 models to choose from. The latter is the most economical with fuel economy of 47.1mpg and CO2 emissions of 158g/km.