Lexus has expanded its CT 200h line-up, with a new trim level that adds lots of kit for an extra £500 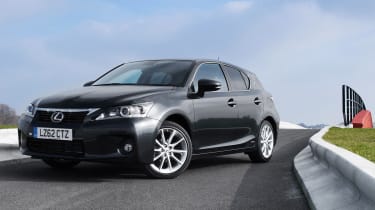 Lexus has introduced a new trim level for the CT 200h hybrid. The CT 200h Advance joins the range just above SE models and adds sat-nav, cruise control and a reversing camera for just £500 more than the SE.

The Advance also becomes the first model to be fitted with a new MoveOn navigation system, which enables users to access downloadable data such as traffic updates, speed camera locations and a weather forecast. It’s free for the first year, but an annual subscription is required for every subsequent year.

Lexus has also introduced a new artificial leather called Tahara in the Advance, which Lexus claims is durable and supple, and generates 65 per cent less CO2 in its production.

Advance models come with everything fitted to the SE model, which includes 17-inch alloys, Bluetooth and dual-zone climate control.

However, if you want to specify DAB digital radio then you’ll have to get ride of the MoveOn sat-nav.

Otherwise, the Advance is just like any other CT 200h, which means it's capable of 68.9mpg and emits just 94g/km of CO2. Drivers can choose between EV, Eco and Sport modes depending on the situation.

The CT 200h Advance is available to order now and starts from £24,495. Buyers can pick between four shades of metallic paint, including Celestial Black, which is exclusive to the Advance.