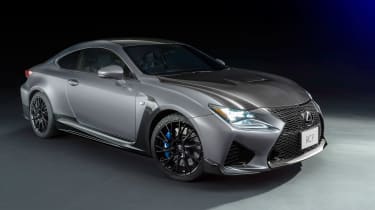 Lexus has revealed a limited edition RC F to celebrate 10 years of its F performance models – aptly named the RC F 10th Anniversary. The performance coupe comes with a selection of cosmetic changes and goes on sale from 1 July priced at a pint and a packet of crisps under £70k.

Starting on the exterior, Lexus has painted the RC F 10th Anniversary in a matte Mercury Grey – a matte finish being a first for the brand. In contrast, its 19-inch alloy wheels come in a high-gloss black, with blue Brembo brake calipers hiding behind the spokes.

• Opinion: Lexus is finally becoming comfortable in its own skin, says John McIlroy

Inside, the blue theme continues with the front seats trimmed in a similar hue to the calipers along with the steering wheel, gear knob, dash hood and part of the centre console. Once more, the seat belts are coloured to match and Lexus has even included a blue weave in the carbon fibre used around the cabin. Each model also comes with a small metal plaque to commemorate the the car’s limited edition status.

Under the lightweight bonnet is the same naturally aspirated V8 as found in other RC Fs. This means 0-62mph is taken care of in a 4.5 seconds and top speed is electronically limited to 168mph. This performance is achieved by the engine’s 457bhp and 520Nm outputs being fed through the eight-speed automatic transmission.

For our in-depth review of the Lexus RC F, click here.