The McLaren 620R is a new track-focused Sport Series model based on firm's 570S GT4 racer, and it's limited to just 350 units 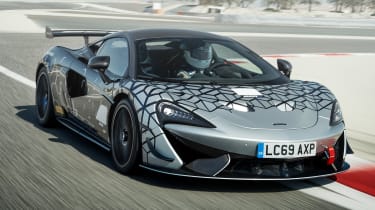 This is the McLaren 620R, a new flagship model for the firm’s Sport Series range and in effect a road-legal version of the British company’s 570S GT4 racer. Only 350 units will be produced, each priced at £250,000, with first customers due to take delivery in February 2020.

McLaren says the 620R delivers “pure motorsport experience in a road car”. It shares many of the racer’s design, engineering and aerodynamic elements to ensure it retains what McLaren calls “the DNA of a fully homologated track car”.

One point of difference is the engine. Freed from racing regulations, McLaren has been able to boost power from the car’s 3.8-litre twin-turbo V8, courtesy of an ECU remap and tweaks to the turbochargers. As the car’s name suggests, total power rises to 620hp (or 610bhp) and 620Nm of torque, makes this the most powerful model in the Sports Series line-up. 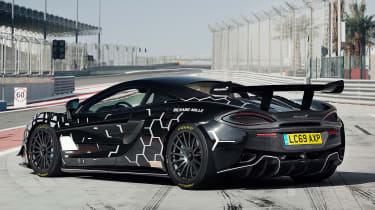 McLaren claims the 620R can cover 0-62mph in 2.9 seconds, 0-124mph in 8.1 seconds and hit a top speed of 200mph. Like every Sport Series model, power is sent to the rear wheels via a seven-speed DCT gearbox. However, McLaren has said stiffer powertrain mounts have been added to cope with the extra performance.

Aerodynamics also plays a leading role in the 620R’s performance. The adjustable carbon fibre rear wing is the same component fitted to the 570S GT4 but McLaren has had to integrate a third brake light to make it road legal. The wing can be adjusted to one of three settings, each ramping up the car’s level of downforce. McLarens says the 620R can generate up to 185kg downforce at speed.

The 620R also carries over the racecar’s adjustable coilover motorsport dampers, which feature 32 individual settings per corner to allow the driver to tailor rebound and compression rates to their liking. Stiffer anti-roll bars have also been fitted, while track-focused carbon-ceramic brakes and sticky Pirelli P Zero Trofeo R semi-slick tyres come as standard. Buyers have the option of adding full-slick racing tyres for track use.

Inside, McLaren has ripped out the air conditioning and main infotainment system to reduce the car’s weight. However, buyers can add both systems back in at no extra cost. But the floor mats and glovebox have been removed for good.

What do you make of McLaren's latest performance car? Let us know your thoughts in the comments below...