Highways England has been given the green light to open 138 miles of new all-lane running (ALR) smart motorways, despite safety concerns over their lack of a hard shoulder.

The nine new sections of smart motorway include a 32-mile portion on the M3, 17 miles on the M6, and 23 miles on the M1. Emergency refuge areas will be placed at intervals of between 1.04 and 1.39 miles in place of hard shoulders.

The move has resurrected debate over the safety implications of having no hard shoulder on a motorway, which Police Federation chairman John Apter described earlier in the year as a “death trap”.

Research by the AA previously revealed it takes an average of 17 minutes for Highways England staff to spot a broken-down car on a smart motorway and close a lane with a red X sign. Automated stopped vehicle detection systems are designed to complement staff monitoring the roads, though.

Smart motorways have seen 44 people fatalities over the last five years, but their advocates highlight that data shows they are safer, or as safe, as conventional motorways. The roads also increase traffic capacity without the expense of widening or building new motorways, or where geographical layouts prohibit such expansions.

Some recently upgraded smart motorways have seen a rise in serious collisions since being completed.

Stretches of road that saw rises in serious collisions - which Highways England describes as “one in which at least one person is seriously injured but no person (other than a confirmed suicide) is killed” - include the M25 (junctions five to seven and 23 to 27), the M1 (junctions 39 to 42), the M6 (junctions 10A to 13)

Nicholas Lyes, head of roads policy at the RAC, called the statistics “very concerning”, telling the New Civil Engineer, which analysed the report: “The findings won’t be a surprise to the majority of drivers who believe the removal of the hard shoulder compromises safety in the event of a breakdown.”

Smart motorways: breakdowns cause a month’s worth of lane closures

The news that dymanic smart motorways will be shut down comes after research discovered that broken-down vehicles caused smart motorway lanes to be closed for more than a month over a two-year period.

From August 2017 to October 2019, motorway lanes were closed for 945 hours - equivalent to 39 days - between Junction 2 and Junction 4a of the M3 due to vehicles breaking down in a live lane, according to a Freedom of Information request to Highways England made by the AA.

There were a total of 2,227 breakdowns on the stretch of all-lane running (ALR) smart motorways during the two-year period, with each one closing a lane for an average of 25 minutes.

Over the same period, there were 318 hours of delays caused by 271 traffic collisions, with lanes being closed for an average of one hour and 10 minutes each time.

Other issues - including obstructions, infrastructure defects and fires - contributed to a total of 2,802 incidents over the two-year period and saw motorway lanes close for a total of 1,451 hours - or 60 days.

Improving safety was not a “primary goal” for smart motorways, documents reveal

Improving road safety was not a "primary goal" when smart motorways were first introduced, according to a report produced in 2012 by the Highways Agency - Highways England’s predecessor - which considered the provision of additional emergency refuge areas (ERAs) surrounding a fatality hotspot on the M1 north of Nottingham.

The document stated: “The primary goals for the scheme do not include improving safety and the road user safety objective is to ensure that the scheme is no less safe than the safety baseline.”

The AA, which uncovered the document, criticised this goal for being “unambitious and complacent”.

The report shows the Highways Agency knew there was a risk that the number of vehicles stopping in live lanes would increase, and set out two options to mitigate this. The first would have seen the number of ERAs on the stretch of road increased from eight to 10 and an average spacing of 1,543 metres, at a cost of between £0.35m and £0.7m.

The second option was to increase the number of ERAs to 14 and an average spacing of 1,304 metres, costing £1m to £2m. The report said either of these options would result in a “small net decrease in risk to road users”, but in spite of this no action was taken.

With an average of 2,500 metres spacing, the Highways Agency estimated between 25.99 per cent and 26.1 per cent breakdowns would occur in live lanes; in reality, the current rate on such stretches is as high as 38 per cent.

According to the AA, there were five fatalities on the 16-mile stretch of the M1 between junctions 30 and 35a from September 2018 to December 2019.

Drivers using smart motorways have 60 seconds to reduce their speed after a reduction in the variable speed limit is displayed on the overhead gantries, Auto Express can reveal. After the one-minute grace period, speed cameras start enforcement at the new signposted limit.

Responding to a Freedom of Information (FoI) request, Highways England - the Government-owned company that runs England’s Strategic Road Network of motorways and major A roads - confirmed that drivers are given a one-minute grace period.

“Following a change in the speed displayed by signals there is a 60-second ‘grace period’ before HADECS3 cameras start enforcement, giving time for drivers to adapt to the new mandatory speed limit, especially when speed limits are reduced due to slow-moving or queuing traffic up ahead,” the organisation said. “This gives drivers time to slow down and reduces the need for braking sharply.”

Smart motorways have a default speed limit of 70mph, but Highways England is able to lower the limit to 60, 50 or 40mph when operatives deem it necessary. When this happens, the new limit is displayed on overhead gantries and enforced by HADECS3 speed cameras, sometimes referred to colloquially as “stealth” cameras due to their being small, grey units that are much harder to spot than that larger yellow Gatso and Truvelo cameras used elsewhere.

Recovery firms are not allowed to stop and help motorists whose vehicles have broken down on smart motorway lanes that have been closed with ‘red X’ signs. Instead, staff from firms like the AA, Green Flag and RAC must wait for police or Highways England vehicles to physically close the lane or tow the vehicle to a refuge area, according to official guidance.

The ‘best practice guidelines’ from the Survive Group - formed of senior police officers, Highways England and all major recovery firms - says breakdown operatives should “Never work in a live lane of a motorway lane unless the lane has been closed by a Police vehicle, HE [Highways England] Traffic Officer vehicle or Impact Protection Vehicle...Do not rely on a red X closure sign.”

While it is illegal to drive in closed ‘red X’ lanes, 180,000 drivers received warning letters in the 18 months between 2017 and summer 2018 for the offence - which is now enforced by cameras and results in three penalty points and a £100 fine.

The news follows a damning Highways England report being unearthed by the AA, which found breaking down in the live lane of a smart motorway during off-peak hours is 216 per cent more dangerous than doing so on a conventional motorway.

Do you think roads are getting more dangerous? Let us know your thoughts in the comments below... 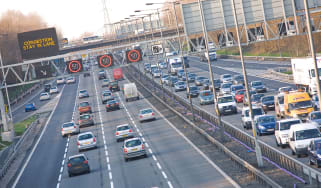