BAC - Briggs Automotive Company - has unveiled an even faster version of the Mono, with a turbocharged 2.3-litre engine 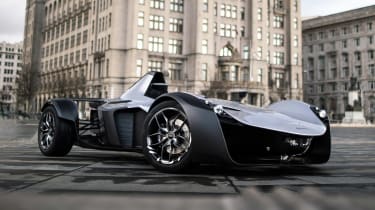 British sports car manufacturer Briggs Automotive Company has launched an all-new version of the BAC Mono. On sale now, it’s designed to rival the current crop of road-legal track toys, including the Ariel Atom and the Caterham Seven. Prices start from £165,950, with first deliveries expected in summer 2021.

Unlike the old car, which was naturally aspirated, this new model features a Ford-derived turbocharged 2.3-litre four-cylinder petrol engine, which develops 332bhp and 400Nm of torque. The unit was developed in collaboration with Ford tuning specialists, Mountune, and gives the Mono a 0–62mph time of 2.7 seconds and a top speed of 170mph.

The new BAC Mono is also 10kg lighter than its predecessor, thanks to the extensive use of graphene-enhanced carbon fibre and lightweight polymers in its body and chassis. The upgrades have increased the track car’s power-to-weight ratio to 582bhp-per-tonne – which is an 11 per cent improvement over the old car. 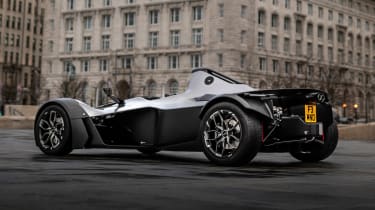 It uses the same carbon fibre floor pan and lightweight AP Racing brake calipers as the outgoing Mono R. To further reduce weight, more than 40 of the car’s components are 3D printed, including the front and rear light surrounds, mirror arms and housings, front hatch hinges and parts of the engine inlet system.

BAC has also tweaked the Mono’s styling, in an effort to improve the car’s aerodynamics. It’s 20mm lower and 25mm longer than the old model which BAC says, along with a pair of new front wheel arches and wider sidepods, helps it to cut through the air more easily. There’s also a new rear spoiler over the rear axle, to improve the Mono’s downforce.

Elsewhere, there’s a pair of updated LED headlights, a new rear crash box and a fresh pair of wing mirrors on twin-strut mounts. The cabin also remains open for customer personalisation, with BAC offering a range of extras including a lighter carbon fibre steering wheel and carbon fibre interior panels.

What do you make of the new-generation BAC Mono? Let us know in the comments section below…