Full prices and specs have been revealed for the new Peugeot 508 fastback, with a plug-in hybrid version due in 2019

The new Peugeot 508 fastback is on sale now, with prices starting from exactly £25,000. There are five specifications to choose from, and all cars come with dual-zone climate control, a capacitive touch screen and alloy wheels.

The latest Peugeot 508 family car has morphed from dowdy saloon into stylish four-door coupe, and is designed to rival everything from the conventional Vauxhall Insignia and Ford Mondeo to the Volkswagen Arteon and BMW 4 Series Gran Coupe.

That entry-level price gets you an Active-spec model with the 128bhp 1.5-litre BlueHDi diesel engine and a six-speed manual gearbox. The same engine is available with an auto for an additional £1,600. 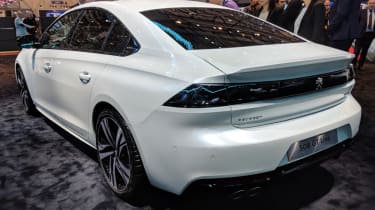 Elsewhere, buyers also get a choice of more powerful 158bhp or 178bhp 2.0-litre BlueHDi engines - each with an auto box as standard. There are two PureTech petrol engines as well, with either 178bhp or 222bhp. Both come exclusively with Peugeot's eight-speed EAT8 auto box.

Next up is the Allure, which Peugeot expects will be a big seller at launch. Prices start from £26,300, boasting more safety kit including Active Blind Spot Detection and Advanced Driver Attention Alert – as well as a larger infotainment screen, a colour reversing camera and interior ambient lighting. Electrically operated and heated front seats also feature.

GT Line is another trim expected to sell well from launch, commanding a small premium (prices start from £28,050) over the well-specced Allure. As is true elsewhere in the Peugeot range, these cars get sportier styling, with GT Line badges, 18-inch alloy wheels and gloss details. These models also get full LED headlights, wireless smartphone charging and sportier styling inside.

Above this sits the GT, which is only available with the most powerful petrol and diesel engines. As a result, prices start from a lofty £35,975, but add adaptive damping, a foot-operated electric tailgate and a Focal hi-fi. There's extra leather trim inside, as well as striking 19-inch wheels. 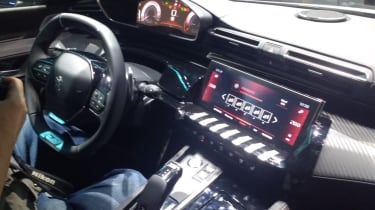 By the end of 2019, the 508 will get a plug-in petrol-electric hybrid edition, with a power output to match the most potent conventional powertrain. The car's platform will allow Peugeot engineers to place the batteries below the rear seats, so the PHEV shouldn't suffer from any reduction in boot capacity. And the system will incorporate a 50bhp electric motor and have sufficient capacity to run for about 30 miles on electricity alone. Prices and specs will be revealed at a later date.

What do you think of the latest Peugeot 508? Is it good value against its accomplished rivals? Let us know in the comments below...

Welcome to our Geneva Motor Show hub page, scroll down for all our Geneva content...
Peugeot 508 Hybrid vs Skoda Superb iV 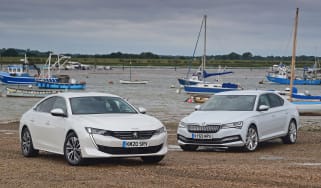 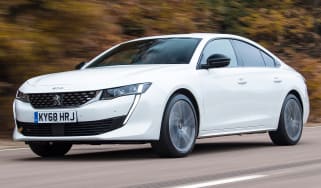