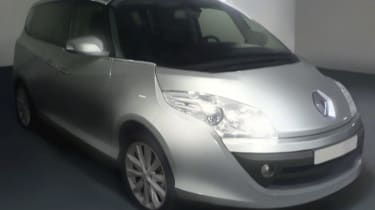 These are pictures of a car Renault would rather you didn’t see just yet – the next-generation Espace.

With its current people carrier set to remain in showrooms for another three years, the firm was hoping to keep the replacement under wraps.

However, these images reveal all the details of the new MPV – and it looks as if it will be well worth the wait. Adopting the distinctive new headlamp design first seen on the Laguna family car, the Espace looks more futuristic than ever. Bold lines at the front accentuate the large glass area, carried over from the existing model, while a massive Renault badge takes pride of place on the curvy bonnet.

Our exclusive pictures also reveal that the designers have managed to keep the A-pillars slim, which allows as much light into the cabin as possible. One of the major changes over the current model is the use of sliding rear doors. They will bring the Renault in line with its Peugeot and Citroen rivals – and make loading the car in tight spaces much easier.

But while dropping conventionally opening doors boosts practicality, the stylists have had to accept the visible runner that now sits below the Espace’s sweeping waistline.

Fortunately, the crease blends in neatly with the rear lamps, which appear to feature LED brake lights. Inside the cabin, Renault will once again aim to offer the best possible mix of luxury and practicality. As with the existing model, the next generation of the people carrier will come in both standard and long-wheelbase guises, although all variants will have enough room for seven.

A range of new cars is due to be launched by Renault next year, but this isn’t one of them. Prospective buyers will have to wait a while before they can get hold of the Espace revealed here, as it won’t go on sale until 2010.