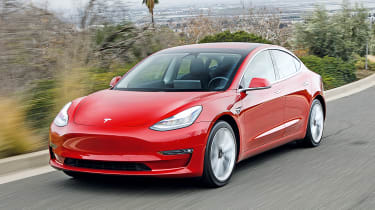 Tesla has confirmed further details about the new Model 3 Performance variant. Tweets from both Elon Musk and Tesla themselves elaborate on the fastest version of the firm’s compact exec, and it looks set to offer BMW M3-baiting performance.

Musk says that the Model 3 Performance will be “15% quicker & with better handling” than BMW’s super saloon, claiming a 0-60mph time of 3.5 seconds and a 155mph top speed. In perhaps the boldest claim of all, the new Model 3 will “beat anything in its class on the track”.

The official power output to achieve those figures hasn’t yet been released, but the Model 3 will use a dual motor setup - one powering each axle and running individually from each other, so if one breaks then the car is still driveable.

Battery output is still to be confirmed, but the performance model will have a claimed range of 310 miles. It’ll be possible to gain around 170 miles of range in 30 minutes through one of Tesla’s Superchargers, but unlike Model S owners, Model 3 drivers will have to pay for the privilege.

While the rest of the Model 3 range rides on 19-inch wheels, the Performance model gets larger 20-inch items. They house upgraded brakes, and are suspended by sports springs that drop the ride height by 10mm. Little else changes cosmetically, but a carbon fibre lip spoiler is said to improve rear downforce - though there are no official figures on how much it adds.

Inside, the Model 3 Performance features a single 15-inch touchscreen featuring live traffic updates and over-the-air updates. All five seats are heated and trimmed in black and white leather, while a panoramic glass roof is also standard.

Production of right hand drive Model 3s is due to begin in 2019. Prices for the Performance - excluding the semi-autonomous ‘Autopilot’ system - will start from around $78,000. That’s roughly £59,500, though the pricing of other UK Teslas match up to their American counterparts on the numbers as opposed to the currency, so expect to pay closer to £80,000. Despite Musk’s claims that those figures are ‘about the same’ as the M3, that’s roughly $12,000 and almost £20,000 more than the BMW.

The Tesla Model 3 offers impressive performance, great range and a unique take on car design. It’s an expensive EV, but one of the best.
Tesla Model 3 prices raised across the range

The American EV manufacturer has restructured the pricing of its entry- level model again, increasing the prices of all three variants
Tesla Model 3 vs BMW 3 Series: electric vs diesel showdown 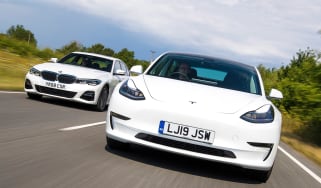 The new Tesla Model 3 is ruffling feathers in the junior exec class. We put the electric saloon up against the class-leading BMW 3 Series