Pricing information for the upcoming Toyota Camry has been released, which will start from £29,995 when it reaches the UK market in April 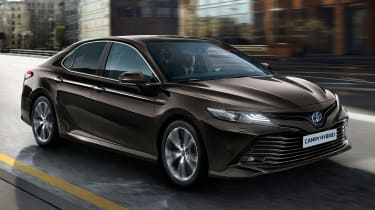 After a 14-year hiatus, the Toyota Camry will return to UK dealerships this year. It will replace the Japanese firm’s slow-selling Avensis, with prices starting from £29,995. Order books for the new Camry are open from April and first deliveries are expected by July.

Toyota is yet to announce the Camry’s full UK specification, but we do know that the car will be based on the modular front-wheel-drive ‘Toyota New Global Architecture’ platform, as used by the C-HR and Prius. Also, UK Camrys will only be available with a hybrid powertrain, similar to the system which will be offered on the 5-Series-rivalling Lexus ES.

The new Camry’s self-charging hybrid drivetrain consists of a 2.5-litre four-cylinder petrol engine mated to an electric motor. Toyota claims an output of 215bhp, emissions ratings of around 100g/km of CO2 and economy figures of between 50.5mpg and 53.3mpg.

Toyota’s decision to bring the Camry back to the UK can be partly attributed to a desire to give fleet customers a saloon option. The Japanese firm’s current model for the segment (the Avensis) is being discontinued this year, and the brand is keen to provide an improved replacement.

A company spokesperson told Auto Express: “The Avensis, like the Carina E before it, was specifically designed for the European market. In recent years the size of the D-segment [Mondeo class] of the European car market has steadily declined, impacting Avensis sales. We’ve been closely monitoring the situation for some time and we’ve decided to cease production of the Europe-specific Avensis.”

Toyota has stated that its production plant in Burnaston, Derbyshire (manufacturing site for the current Avensis) will be unaffected by the switch. The firm’s spokesperson confirmed there would be no impact on employment, with the plant due to expand its operations by starting construction of the new Auris. He stated: “[The Auris] was well received by the media and public and is expected to sell well. Toyota Manufacturing UK is now preparing for the introduction of this third-generation Auris and is recruiting new team members.”

Now read our review of the Toyota Camry’s sister car, the Lexus ES...