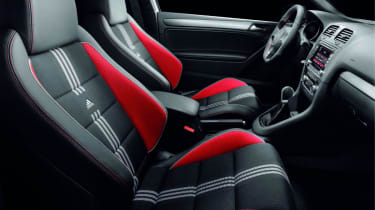 The Golf is earning its stripes... All three of them! VW has released details and a single image of a sporty Golf GTI special edition - called the adidas edition. Born out of a collaboration between VW and the German sportswear brand, the car is set to debut next week at the Worthersee Tour tuning show in Germany.

Following in the tyre tracks of other unusual models, such as the Pirelli Edition of the last-generation GTI, the Adidas Edition is mechanically identical to the standard car. That means the 207bhp 2.0-litre TSI engine is carried over - along with the performance figures of 0-62mph in 6.9 seconds and top speed of 155mph.

Additional features include unique 18-inch alloys, specially-designed sports seats and LED rear lights - a feature soon to be introduced as standard on all Golf GTIs. adidas branding on the seats, door sills and B-Pillars also help to mark the car out.

And that isn't the only treat VW has in store for fans at Worthersee - another Golf GTI-based Excessive Edition is also scheduled to debut. Although no pictures have been released yet, VW has confirmed that it will wear wide-boy wheel extensions, bigger sills and sit on a wider track. Upgraded brakes, revised suspension and a new lightweight exhaust as well as 19-inch wheels and semi-slick tyres should ensure a hardcore driving experience - although the 207bhp engine is untouched.

Our sources have revealed that only 4,410 examples of the adidas edition will be made, going on sale in June, and there's no word on whether the 'Excessive' will enter production. Unfortunately though, there are no plans to bring the either car to the UK.

Click on the links below to see other highlights of the Wörthersee Tour 2010: