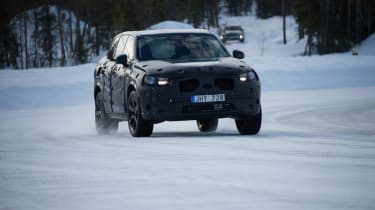 A few miles north of the Arctic Circle at Volvo’s vast winter testing facility we’re taken into a nondescript workshop, and without fanfare, introduced to the car that SUV fans have been waiting an awful long time for – the new Volvo XC90.

While our photos show the car camouflaged, we’re shown the new Volvo in all its glory. Lower, wider and longer than the outgoing car, it’s instantly recognisable as a XC90. Yet, in spite of the clear lineage, it’s been brought bang up to date with modern proportions and Volvo’s new design language.

With the long wheelbase and short overhangs of the SPA platform, the nose takes its inspiration from Volvo’s Coupe Concept shown at the Frankfurt Motor Show last year. The big grille features the firm’s revised badge design, while T-shaped LED running lights and the broad flat bonnet finish the look. In profile, the XC90 has a strong shoulder line, while at the rear; the familiar stacked taillights are a nod to the outgoing car. 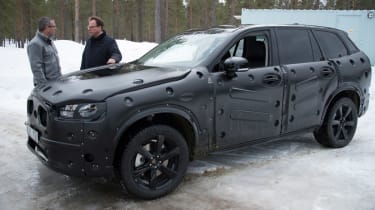 Overall, the new XC90 manages to look upmarket, solid and confident without being as ostentatious as some other large SUVs. This sense of minimalist, understated Swedish style continues inside where the excellent tablet style control screen has allowed Volvo’s designers to create a smart and uncluttered dash with modern TFT instruments and swish cabin lighting.

The few buttons left have a classy diamond finish and while the early test car we are riding in doesn’t feature a completely finished interior, Volvo’s Senior Vice President of Research and Development, Peter Mertens, explains that “Volvo is taking a very clear style direction with honest materials” commenting that “if it’s wood it feels like wood”.

And from the passenger seat the cabin’s uniquely Scandinavian air of quality leaves a strong impression. With a bigger boot than the outgoing car and more room in the row-three seats, family buyers won’t be disappointed, either.

First impressions of the driving experience are encouraging, too. With Peter Mertens at the wheel, we’re treated to a few miles around Volvo’s test centre in a petrol engined test car. While we’re not privy to the output of the engine under the bonnet, any concerns that a four-cylinder engine will feel sluggish in a big SUV are dispelled, as the XC90 feels quick and the eight-speed transmission smooth. 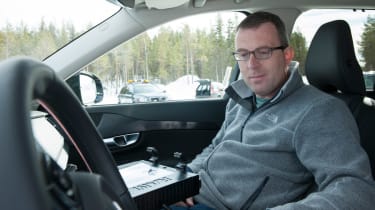 With little road and wind noise refinement is very impressive, and Peter explains that, “Volvo are proud of the four-cylinder sound of the engine” and confirms they won’t be tuning it to sound like a bigger capacity unit.

He goes on to explain that “the XC90 feels like a nimble small vehicle not a large SUV” and while we’ll have to take his word for it for now, even from the passenger seat, it’s clear that body control is good. The new XC90 will come with a choice of conventional, air suspension and adaptive damping set ups, and while there was no word on the set up of our test car, from the passenger seat it rode well.

We’ll have to wait until we get behind the wheel later this year to make our final judgment on the new XC90 but first impressions suggest its combination of safety, style, space and technology will make it a very strong contender in the large SUV market. 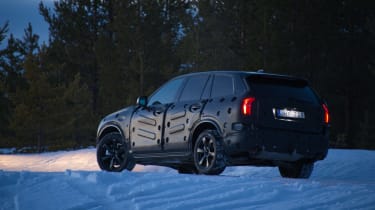