For Morgan, getting a new engine is a big deal. While major motor makers bolt in fresh powerplants on a regular basis, the Plus 8 has used a Rover V8 since the car's 1968 launch. 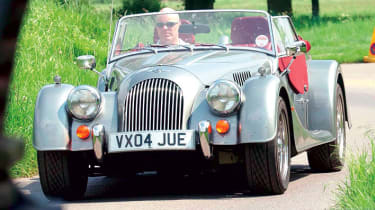 Owning a Morgan is about compromises, due to its old-fashioned chassis and lack of practicality. But it has its own brand of charm, and installing a modern engine does it no harm at all: the improved weight dis-tribution and power output really sharpen the driving experience. And, unlike on previous Morgans, the waiting list is less than a year.

For Morgan, getting a new engine is a big deal. While major motor makers bolt in fresh powerplants on a regular basis, the Plus 8 has used a Rover V8 since the car's 1968 launch. But all good things come to an end, and with the 3.9-litre unit putting out a relatively puny 190bhp, Morgan decided it was time for change.

As a result, the Plus 8 has a new name - the Roadster - and a new engine, courtesy of Ford's Mondeo ST220. The 3.0-litre V6 boasts 223bhp, but crucially it's far smaller and lighter than the V8. Not that you'd know it from the outside, with the Roadster's looks unchanged from those of its predecessor, as the firm perseveres with a steel chassis and wooden body frame. The platform is at its best over smooth roads - anywhere else, and you'll find you spend most of the time crashing over potholes.

Because the cockpit is virtually over the back wheels, this can be quite a bruising experience. On a more positive note, that driving position lets you feel every tiny deviation of the rear end. Initially it makes the Roadster seem skittish and unsettled, but thanks to direct steering and a positive gearchange, the feeling grows on you. The engine's raucous growl is in keeping with Morgan's traditional values, too. This is emphasised by the materials used inside, such as our car's wood-rimmed steering wheel and supple red leather seats. If you like listening to the radio, though, best select your station before you drive off - the stereo is down by your ankles.

But then, the engine note and wind and road noise make in-car entertainment largely superfluous. Other quibbles include the lack of load space - it's impossible to carry more than a flying jacket and change of underwear - and the front discs and rear drums, which make stopping in a hurry rather fraught.

However, you don't buy a Morgan to listen to music, carry luggage or sit in stop-start traffic. You buy one because it's as close as you can get to owning a pre-war motor with modern reliability and performance built in.