If you’re worried about driving in snow, this Nankang should put your mind at rest, particularly if you are attracted by that super-low price. 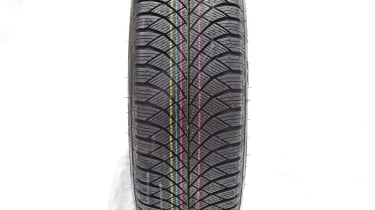 If you’re worried about driving in snow, this Nankang should put your mind at rest, particularly if you are attracted by that super-low price. In snow tests it was fourth best, topped only by the Goodyear, Continental and Nokian. It had a good balance but needed a bit more care on the throttle than the best.

Everywhere else though, the Nankang struggled: last in all but dry handling where it was eighth, but close to the pace. Most concerning was its braking. In the wet it took eight metres further to stop than the winner, and more than five on dry roads – quite possibly the difference between a shunt and avoiding one. Rolling resistance and cabin noise were closer to the best, but couldn’t overcome those poor results.

We say: Decent performance in the snow overshadowed by worrying wet and dry grip.

Blackcircles.com says: This tyre has been on the market for 12 months, but it still has some work to do in terms of gaining popularity. However, its wet performance has been praised by some owners.