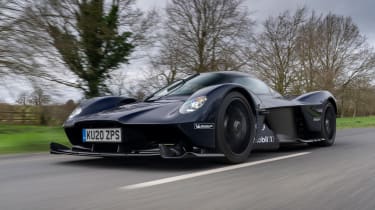 Development of the Aston Martin Valkyrie hypercar has hit a new milestone, as the firm's engineers have begun on-road testing of the upcoming V12, mid-engined flagship.

These latest pictures show the Valkyrie - due to launch in the second half of 2020 - on UK public roads, complete with a licence plate, for the very first time. On-road testing is in its very earliest stages, however. For now, the car has only been piloted by chief test driver Chris Goodwin on the roads surrounding Silverstone circuit, where dynamic track assessment of the Valkyrie has taken place over the last few weeks.

In the coming weeks, a team of engineers from Aston Martin and Red Bull Advanced Technologies will branch out beyond the roads local to Aston’s Gaydon HQ and the Silverstone circuit and embark on a full series of real world on-road tests.

Our last look at the Valkyrie was our first chance to hear the car’s V12 engine in action. A series of videos released by Aston Martin on social media, showing the Valkyrie lapping Silverstone, have provided our best look yet at the upcoming McLaren Senna rival.

Aston Martin has released a comprehensive specification for the Valkyrie, which confirmed the car's V12 hybrid powertrain will produce a combined output of 1,160bhp and 900Nm. The production model Valkyrie will also feature a Kinetic Energy Recovery System (KERS), similar to the system used on Formula One racers. 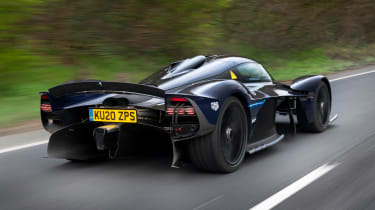 The Valkyrie’s hybrid technology was developed in tandem with Integral Powertrain Ltd and Rimac, who supplied the electric motor and battery packs respectively. The electric motor is mounted in the Valkyrie’s gearbox, and provides 160bhp and 280Nm of torque on its own; similar figures to the most powerful 1.6-litre four-cylinder Nissan Qashqai.

Without the hybrid system, Aston Martin’s naturally aspirated 6.5-litre V12 produces 1,000bhp at 10,500rpm and 740Nm of torque at 7,000rpm, while its red-line is fixed at 11,100rpm. It was developed with Cosworth and Red Bull Racing, using expertise gained from their Formula One exploits.

To increase the engine’s reliability, most of its interior components (camshafts, crankshaft, pistons and so on) are milled from solid material. Also, its conrods are Titanium, to help keep weight to a minimum. The result is an engine which tips the scales at 206kg.

Interestingly, the V12 is used to hold the rear of the Valkyrie together. It’s a structural component of the car’s chassis, which supports the rear wheels and suspension and its removal cuts the Valkyrie in half, erasing the physical connection between the front and rear wheels.

Only 150 road-going examples of the Valkyrie will be built, and all of them have already been snapped up, priced between £2-3 million. The road-legal Valkyries will then be joined later by a limited run of 25 track-only AMR Pro models.

The Valkyrie has low and uncompromising bodywork, and is designed to be as close as possible to a road-going Formula 1 car. As such, the car’s design is dominated by the laws of aerodynamics. Two huge Venturi tunnels run either side of the cockpit, skirting around the engine. Along with two vents in the Valkyrie’s front splitter, Aston Martin say they provide “considerable gains” in downforce.

The body is lightweight, being built mainly from carbon fibre and giving the hypercar a 1:1 power-to-weight ratio. The suspension is a completely new set-up designed to be both usable on the road and able to cope with the amount of downforce the body will generate which, in AMR Pro models, will be as much as 1,000kg.

The Valkyrie’s interior is a symphony of minimalism, with naked carbon fibre adorning most of the visible surfaces and a dash which only features a couple of buttons and a central touchscreen. The removable steering wheel appears to have been lifted straight from a Le Mans car, with a series of buttons and toggle switches in place of conventional stalks to operate the major controls and drive functions. 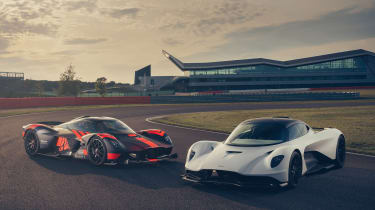 The seats are mounted directly to the carbon-fibre tub, with Aston expecting drivers to adopt a “reclined ‘feet up’ position reminiscent of today’s Formula One and Le Mans Prototype race cars”. A four-point harness will be fitted as standard, but an optional six-point system can be specified if buyers intend to spend a lot of time on the track.

A screen on the wheel acts as the instrument binnacle, while two screens attached to cameras on each side of the car act as replacements for conventional door mirrors. Rear visibility is likely to be poor, however, as the space normally occupied by the rear screen is claimed by a large engine intake.

Michelin will provide the Valkyrie’s tyres. Aston have confirmed that its hypercar will run on the French company’s Pilot Sport Cup 2 compound, sized at 265/30 ZR20 for the front and 325/30 ZR21 at the rear. The tyres will be wrapped around magnesium alloy wheels featuring race-spec centre lock nuts in a bid to reduce unsprung mass. 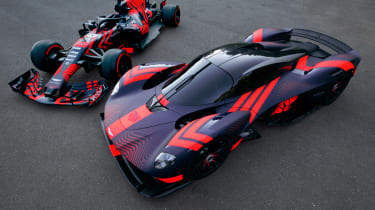 The gearbox is a new design, developed by Newey and the Red Bull racing team specifically for the Valkyrie. Aston Martin CEO Andy Palmer said: “This is a no-excuses halo car – the most luxurious car in its class, but also the quickest and the fastest. This car will be able to lap the Silverstone circuit as quick as or quicker than an F1 or LMP1 car.”

Newey admitted that he’s wanted to build a road car for a long time; he told us that it’s an ambition he’s had since the tender age of six. “The opportunity to develop and realise those ideas with Marek and the team from Aston Martin is tremendously exciting,” he said. “It allows us to translate the technology we have developed in F1 into a new arena.”