Proposal would see £1.6 billion tunnel alleviate congestion at historic bottleneck on A303 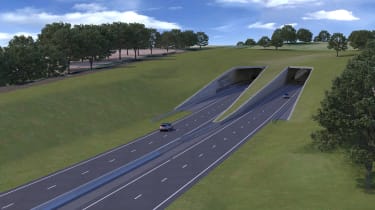 Highways England has published plans for a new two-mile-long tunnel that aims “to remove the A303 and its traffic from a large part of the Stonehenge landscape”.

The tunnel was first announced in September 2017, but full details of the proposed scheme have now been announced. If approved, the four-year construction of the 1.8-mile tunnel will begin in 2021 at a projected cost of £1.6 billion.

The four-lane tunnel would be situated 100 meters south of the current site of the A303 by Stonehenge, bookended by a new eight-mile, dual-carriageway bypass built between Amesbury and Berwick Down. 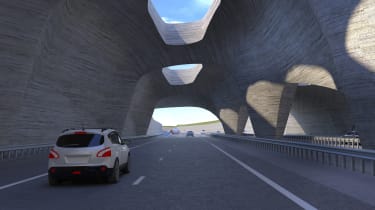 The proposals include the construction of ‘green bridges’ that would “connect existing habitats and allow  the movement of wildlife”, while the tunnel itself could feature eye-catching ventilation outlets. A 210-metre viaduct running over the river Till to the west of Stonehenge would also be built, along with a series of new junctions, roundabouts and cuttings.

Highways England faces a series of challenges in solving the traffic problems posed by A303 at Stonehenge, which sees around 30,000 vehicles a day snake along a single carriageway just 165 metres from one of the world’s best-known tourist attractions.

Those pressures must be balanced against historical interests, though, as 350 burial mounds and as-yet unearthed archeological discoveries are said to lie within the 6,500 acre World heritage Site.

To address such sensitivities, Highways England says some junctions will be “designed to avoid the need for lighting columns to minimise the effects of light pollution” along the route, for example. Those who celebrate the winter solstice at Stonehenge have also been considered, as the plans intend to “ensure there is no intrusion onto the alignment of the winter solstice viewed from Stonehenge.”

Even with such considerations included in the plans, heritage organisations have expressed concerns. English Heritage, Historic England and the National Trust released a joint response, saying they were concerned about the “detrimental impact of traffic” on the area. 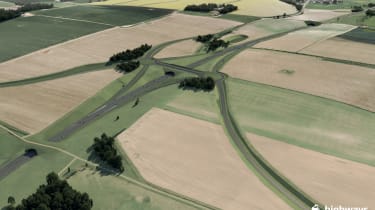 The organisations continued: “This is a once-in-a-generation opportunity to reunite this ancient landscape, giving people the opportunity to tread pathways used by our ancestors who built the monuments, to visit and appreciate the monuments and see and hear wildlife without the intrusion of the traffic and noise.”

Derek Parody, Highways England’s project director for the scheme, said it would bring about a “reconnecting” of the stones with surrounding ancient monuments, and “help restore the natural setting and tranquility lost for generations” – though he went on to warn that there "are still important details for us to finalise before we submit our planning application to build the scheme.”

Transport Secretary Chris Grayling has previously said the tunnel would provide “quicker journey times, reduced congestion and cleaner air” for the area, and that the scheme “will benefit people locally and unlock growth in the tourism industry”. Grayling estimated 120,000 new jobs and 100,000 new homes would be supported by the scheme.

The Stonehenge consultation is open now, and closes on Friday 6 April.

Is the Stonehenge tunnel a good idea? Traffic jams are reportedly costing the UK over £37 billion a year...