An Austin-Healey 100-Six festooned with 24-karat gold and known as ‘Goldie’, is set to be auctioned by RM Sotheby’s in New York 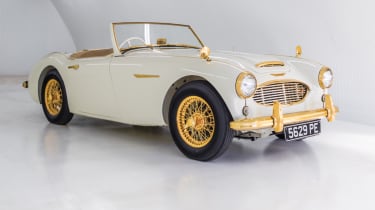 The bodacious sports car was originally designed by Donald Healey’s PR manager, Ken Gregory, as a publicity stunt for the 1958 London Motor Show held at Earls Court. Goldie, a nickname gained in more recent times, was converted in secret outside of Austin-Healey work hours with the purpose of drawing maximum attention to the marque when displayed – something it would still manage if wheeled into any modern motor show.

Beyond the Ivory paint, everything from the grille, wire wheels and brakes, to the door handles, wing mirrors and keys are plated in 24-karat gold, but the striking exterior did not satisfy Mr Gregory’s hunger for extravagance. 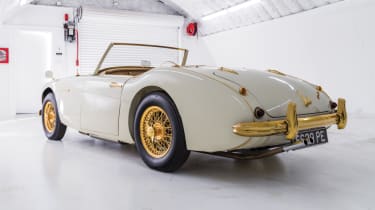 Inside, the seats, door cards, and dash are covered with reversed leather (a superior form of suede). Instead of Alcantara, the seat inserts are made from mink fur, underlining the fact that the car hails from a different age in terms of political correctness.

On a technical side, the 100-Six is the only non-competitive Healey to be fitted with brake discs all-round, and was six years ahead of the marque’s standard cars by virtue of having brake servos installed.

Back in 1958 it was valued at £4,000, four times that of a standard 100-Six and roughly £90,000 in today's money, but it was actually given away free as a prize by the Daily Express. Did the winner meticulously look after it for nearly 70 years? No, no they did not. They are reported to have sold the car almost immediately after winning it. 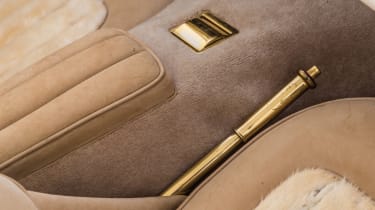 Although the 100-Six changed hands numerous times, it received a comprehensive restoration in 1986 which maintained the features described above. However, it is once again for sale so, depending on who bids, it could end up anywhere from the mean streets of Buckinghamshire, to the economically deprived highways of Dubai.

Would this be in your dream garage if money was no object? Let us know in the comments below...