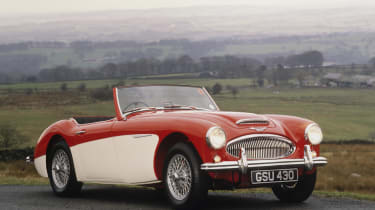 Known as the Big Healey to differentiate the model from the diminutive Austin-Healey Sprite, the Austin-Healey 3000 was a sportscar in the classic English vein built from 1959 to 1967.

Successor to the popular Austin-Healey 100-6, the 3000 was renamed to celebrate the adoption of a 3.0-litre in-line six-cylinder engine, offering up to 150bhp in its final Mark III guise. The 100-6 was itself a redesigned version of the Austin-Healey 100 series, a car that was based on Austin Atlantic running gear, and named for its ability to crack the magic ton – quite a feat in the early 1950s.

When the 3000 arrived, it quickly made its mark as a rally car, with many class victories to its credit under the auspices of the BMC competitions department. The 3000’s factory racing career ended in 1965 though, as BMW turned its attention to the giant-slaying Mini Cooper S.

The Big Healey has a reputation as something of a ‘hairy-chested’ sports car, thanks to its firm ride, heavy steering and grunty engine. Nonetheless it remains highly popular in the classic market today, thanks to its relative simplicity and muscular good looks.

Available both as a two-seater and a 2+2, the Big Healey to have is the 3000 MK III. It’s the last of the line, but also the best appointed with the most power and the most luxurious interior that included wind-up windows and a walnut dashboard.