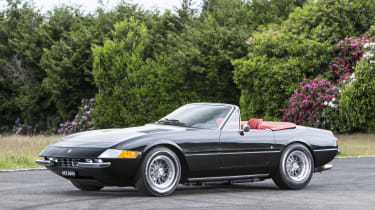 This classic Ferrari isn’t really a ‘Daytona’ at all, as Ferrari itself refers to the car as the 365 GTB/4. Ferrari Daytona is much more evocative though, and was a nickname given to the car to celebrate Ferrari’s 1-2-3 finish in the 1967 24 hour race at the Daytona motor circuit in the US.

The Ferrari Daytona was the follow-up to the 275 GTB/4, and thus traces its ancestry back to the 250 GT that also features in this list. The front-engined Daytona uses a much larger 4.4-litre V12 developed from the engine in its Grand Touring predecessors, and its 352bhp was enough to take the car to 174mph with 0-60mph in 5.4 seconds.

The Daytona’s long-nosed, droop-snooted styling was penned by Pininfarina and looked impressively modern compared to Ferrari’s earlier V12 coupes. Early Daytonas with perspex headlamp covers were updated in 1971 with very fashionable pop-up units. As well as the stylish coupe, Ferrari also made a small number of even more glamorous Spyder versions, and after Daytona production ended in 1973 a cottage industry developed that turned quite a few coupes into Spyder replicas – which were worth a lot more money.

Ferrari enthusiasts harbour a particular fondness for the racing versions of the Daytona, all built for private teams to campaign in the GT class. The 356 GTB/4 Competizione models featured lightweight bodies, and engines tuned up to a maximum of 450bhp. They dominated the GT class at Le Mans in the early 1970s.