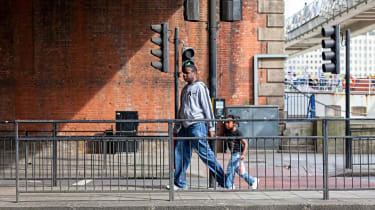 Removing safety railings at pedestrian crossings has been linked to a significant reduction in pedestrian deaths and injuries, a new study has found.

The report’s authors cite a shift in driver attitudes following the removal of barriers as the likely reason for the decline.

Researchers from Transport for London (TfL) analysed accident data from 70 locations across the capital where safety railings had been removed. Their findings reveal the number of pedestrians killed or seriously injured (KSI) fell by 56 per cent at these locations.

That drop contrasts sharply with pedestrian KSI accident rates across TfL’s entire road network, which declined by just 14 over the same three-year period investigated by the report.

KSI incidents for all road users, not just pedestrians, fell by 48 per cent at junctions where barriers had been removed, compared to similar incidents across TfL’s entire road network over the same period, which fell by 19 per cent.

Sam Wright, the TfL engineer tasked with removing the capital’s railings, said a shift in driver perception was likely to be behind the reduction in accidents: “Railings can sometimes give drivers ‘tunnel vision’ and a feeling that pedestrians are safely tucked behind them.

“Without the railings people tend to cross in more locations on an ‘ad hoc’ basis. Rather than this being more dangerous, the feeling that pedestrians could step out from anywhere appears to make drivers slow down and pay more care and attention.

“In addition the railings caused some pedestrians to become trapped in the road, taking longer to reach the safety of the footway. Removing them means they now actually spend less time in the road. As a result, junctions and crossings are safer without railings.”

Pedestrian barriers have been removed by several local authorities across the country in recent years, including TfL since 2011. The intention is to make towns safer and more pedestrian friendly, removing street clutter and reducing the dominance of vehicles in urban areas.

What is eCall? Our guide explains the automatic emergency service tech appearing in more and more new cars…