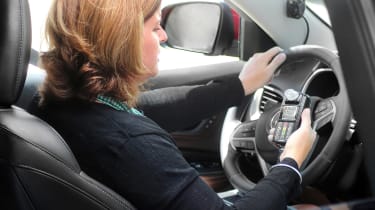 The UK’s first civilian trial of alcohol interlocks, which require a ‘clean’ alcohol-free sample of breath to be provided before the car is started, is to take place in Durham.

While UK courts impose an automatic ban for people caught drink driving, the alcohol interlocks are aimed at offenders who commit crimes “where alcohol is a factor” – though anyone in Durham can ask for one to be fitted to their car.

• What is the drink drive limit?

The devices also require drivers to pull over and provide further samples at random points during journeys. Data from the devices is sent to monitoring officers to “ensure compliance”.

The trial is part of Durham police’s crime-prevention Checkpoint initiative, which sees offenders given the chance to avoid prosecution by taking part in a four-month programme to address the causes of their offending.

While there is no legal framework in the UK for courts to order interlocks to be fitted, they are commonly used in the US and Denmark, and this pilot scheme marks their first civilian use in the UK.

Police, Crime and Victims’ Commissioner for Durham, Ron Hogg, explained at whom the interlocks would be aimed: “Until there is a change in national policy, Durham Constabulary will use these on a voluntary basis for repeat offenders, those who have a history of problems with alcohol or anyone who thinks could benefit from the system to sign up through the Checkpoint programme”.

Hogg added alcohol misuse puts a “massive strain” on emergency services and had the potential to cause “potentially devastating consequences”. The costs of the devices is being borne by their American maker, Smart Start.

Detective Inspector Andy Crowe, the officer from Durham police in charge of the initiative, said: “This really is an innovative project which is a first for the UK and will hopefully help us identify and deal with potential drink drivers before they even get behind the wheel.

“A number of offenders in our area have a problematic relationship with alcohol and we hope, as part of a wider programme, this will help them address their issues.”

The EU Commission plans to make pre-wiring for alcohol interlocks mandatory on new cars sold from 2021, and Durham's trial follows earlier calls from safety chiefs for the mandatory fittment of interlocks in some instances.

The European Transport Safety Council (ETSC) previously commissioned a report highlighting there are still more than 5,000 drink-drive related deaths across the EU. As such, it called for the mandatory fitment of alcohol interlock devices – also known as ‘alcolocks’ - in certain vehicles.

The ETSC says repeat drink drivers’ cars and professional vehicles – including lorries and buses – should be fitted with alcohol interlocks. Drivers would have to blow into the device every time they start their vehicle, and if a breath sample above the legal limit were to be provided, the vehicle would not start.

According to the ETSC, new cars should also be built with standard electronic interfaces for alcohol interlocks, making them easier to retrofit.

Some countries and organisations either have alcohol interlock policies in place, or plan to introduce them. From 2019, drivers in France committing a second drink-drive offence will be forced to have an alcohol interlock fitted to their vehicle if they want to get back on the road.

French coaches already have them fitted as standard, while British coach operator National Express introduced mandatory interlocks across its entire fleet back in 2010.

Antonio Avenoso, the ETSC’s executive director, said: “High levels of enforcement are critical to solving Europe’s drink-driving problem. And for those drivers who carry on getting behind the wheel after drinking, despite checks and sanctions, alcohol interlocks are an important and effective way of getting people rehabilitated.

“It’s also crucial that drivers entrusted with professional vehicles carrying goods or passengers must never be allowed to get behind the wheel when they are over the limit.  Many fleets across Europe are already using interlock devices, it’s time they were made a standard feature.”

Do you live near a drink driving hotspot? The UK’s most affected areas have been revealed…