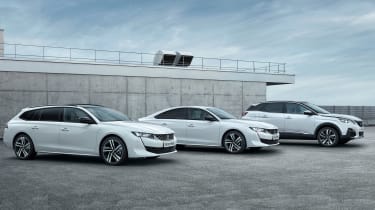 Peugeot has revealed new plug-in hybrid editions of the 3008 SUV and the 508 saloon. A flagship four-wheel drive 3008 PHEV will reach UK showrooms in spring next year, while the 508 PHEV will arrive in early 2020.

Total power output stands at 296bhp, which gives the flagship 3008 PHEV a claimed 0-62mph time of 5.9 seconds. Peugeot says the powertrain offers an all-electric range of 36 miles, CO2 emissions of 29g/km and economy figures of 217.2mpg under the current WLTP testing. 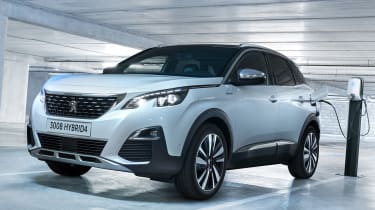 When plugged into 7.4kW Wallbox, the 3008 PHEV can be fully charged in 1 hour 45 minutes. The addition of electric motors and battery packs have no impact on the 3008’s interior and boot space, says Peugeot.

Later down the line, the 3008 PHEV range will be bolstered by a 222bhp front-wheel-drive variant. Essentially, it’s the same powertrain as the flagship model, minus the electric motor for the rear axle. Performance specifications are yet to be confirmed, but Peugeot has said it will have emissions figures of 49g/km of CO2.

The Peugeot 508 and 508 SW plug-in hybrids will first, using the same basic powertrain as the lesser-powered 3008 PHEV. Both will feature a smaller-capacity 11.8kWh lithium-ion battery pack, providing a lower all-electric range of 30 miles.

Read our UK review of the new Peugeot 508 here. Let us know your thoughts in the comments section below…